BIRN has published an updated and improved version of its War Crimes Verdicts Map, an interactive tool that offers an overview of hundreds of court rulings on the crimes committed during the 1990s wars in the former Yugoslavia. 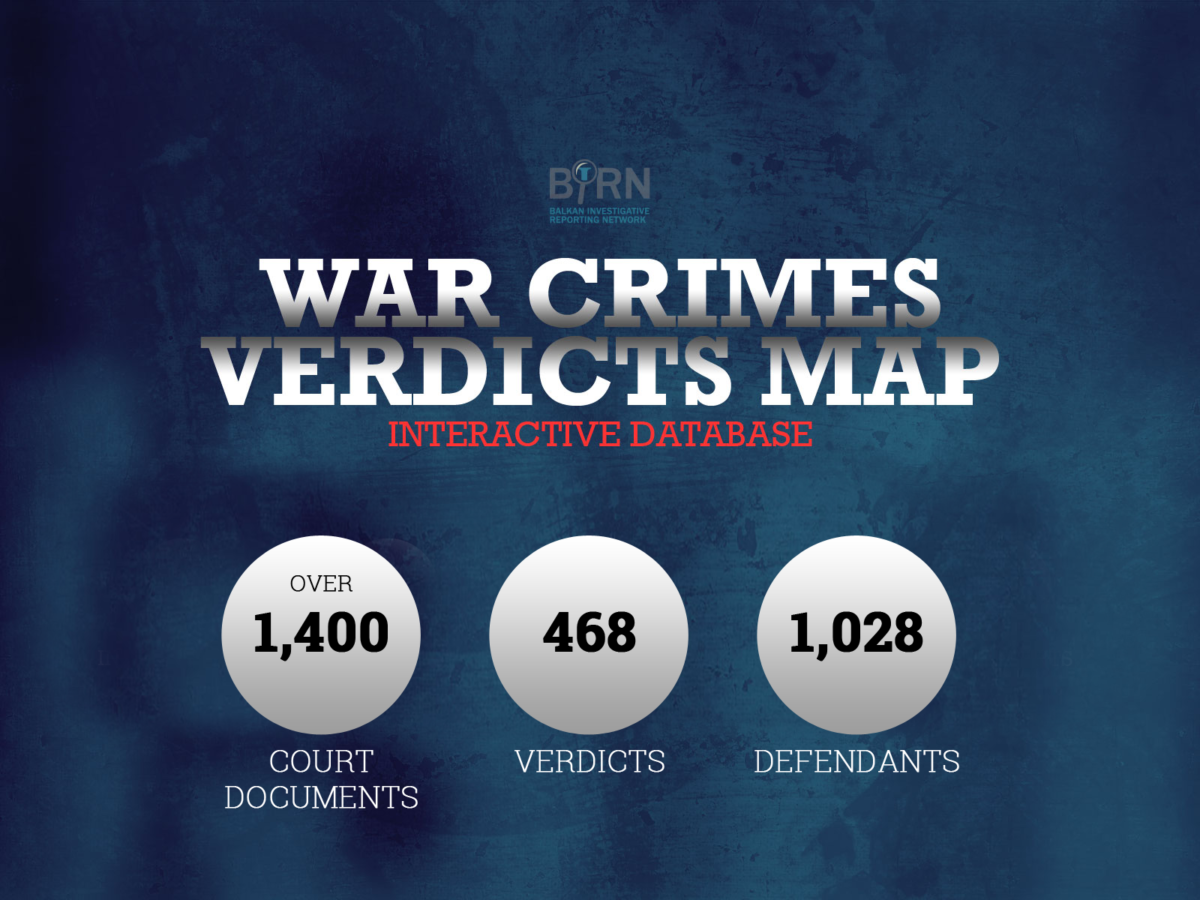 The Balkan Investigative Reporting Network published its updated and improved War Crimes Verdicts Map, enabling users to search rulings in cases from courts across the former Yugoslavia and from the UN tribunal in The Hague.

The map includes all the final war crimes verdicts that are available from 42 different domestic courts in Bosnia and Herzegovina, Croatia, Montenegro, Kosovo and Serbia.

It also includes the verdicts handed down by the International Criminal Tribunal for the Former Yugoslavia, and cases in which defendants died during their trials at the UN tribunal.

In the updated version of the map, users can now search by defendants’ names, the units to which they belonged, the countries in which the courts are located, the crime locations and the dates. It is based on over 1,400 court documents.

The number of verdicts included is now 468, with a total of 1,028 defendants. The verdicts were handed down between 1992, when the first cases in Croatia were opened, and 2019.

Courts in Bosnia and Herzegovina delivered the most verdicts – a total of 209 – while Croatia had the biggest number of defendants, 396 in total.

“This map is the result of our dedicated work in following both international and domestic war crime trials since 2004. While reporting from the courtroom, we as journalists often struggled to get all the documents. Through the years, we accumulated a significant archive and we wanted to share this with our colleagues but also the general public to make their work in following war crime trials easier and more factually-based,” said Marija Ristic, BIRN’s regional director.

“This war crimes verdicts map comes amid growing efforts of courts to anonymise court documents, preventing us from reporting fairly and correctly from trials,” Ristic added.

In the future, the map will also include verdicts handed down by the Mechanism for International Criminal Tribunals and the Kosovo Specialist Chambers in The Hague.

In some of the countries however, BIRN is still waiting for courts to provide all their verdicts.

The wars in the former Yugoslavia left some 125,000 people dead, and around 12,000 are still listed as missing.

The Balkan Investigative Reporting Network and Impunity Watch are launching a new report examining gender equality, transitional justice and the role of the international community in former Yugoslav states. 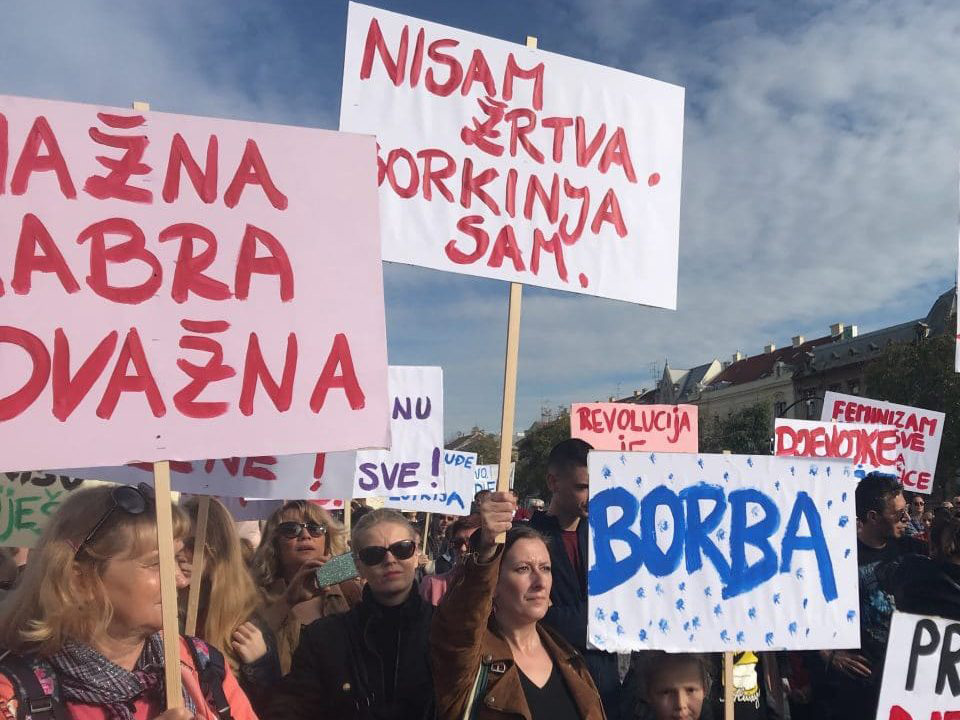 ‘Justice for Girls’ protest in Zagreb in October. Photo: BIRN

The new report entitled ‘Balkan Chronicle: Gender Equality, Transitional Justice and the International Community’, produced by Impunity Watch, will be launched on Friday at a presentation at the Marriott Hotel in Sarajevo as part of BIRN’s Transitional Justice Programme.

The report examines the topic of gender justice in post-Yugoslav societies, with a special emphasis on the role of the international community.

One of the findings of the report is that the responses of the international community to violations of the principles of gender equality and transitional justice in the Balkans were often too narrow and lacked long-term political support.

“Political settlement and economic reform, which only benefit a few, have been prioritised over the issue of gender equality and justice from the very beginning,” said Thomas Unger of Impunity Watch, the author of the report.

The launch event will feature a presentation of the key findings of the report and a panel on the contribution of gender justice to conflict prevention.

The panel will make important links between transitional justice, gender and conflict prevention, with recommendations for policy-makers.

The panelists will be civil society activists from various parts of the former Yugoslavia as well as international policy- and decision-makers.

The launch event is part of BIRN’s Transitional Justice Programme – a regional initiative that aims to improve the general public’s understanding of transitional justice in Albania, Bosnia and Herzegovina, Croatia, Kosovo, North Macedonia, Montenegro and Serbia. The programme is supported by the European Commission.

The launch will take place on Friday at 10am local time, and anyone interested in attending should RSVP to jovana.prusina@birn.eu.com by Thursday.

The working languages will be English and Bosnian/Croatian/Serbian. Simultaneous translation will be provided.

The agenda can be seen here in English, and here in Bosnian/Croatian/Serbian.

The Annual Reports provide an overview of BIRN Hub’s activities throughout the given year.
The Audit Reports contain data on BIRN’s finances during a year as audited by an external certified auditor. 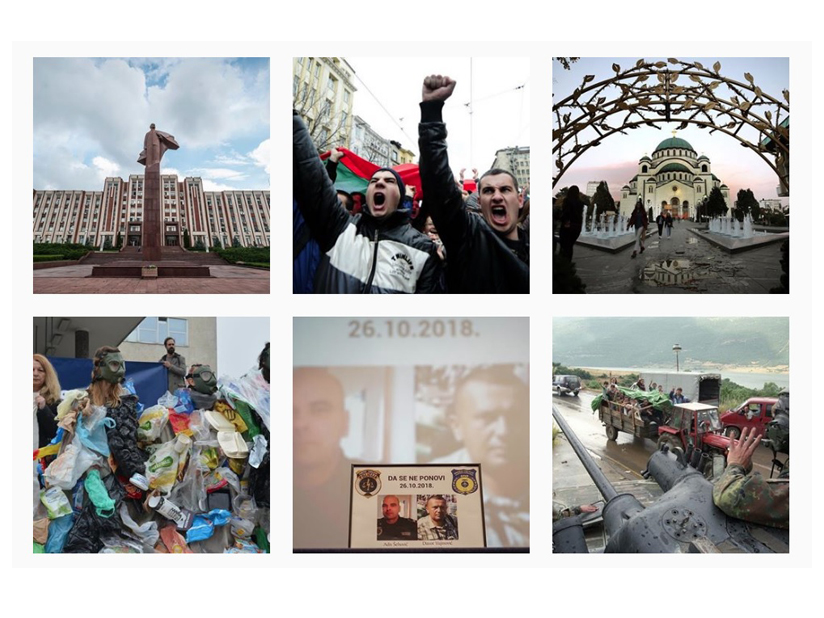 A new report by the Balkan Investigative Reporting Network monitored courts and prosecutors in Kosovo and found they are still failing to get adequate results in the fight against corruption. 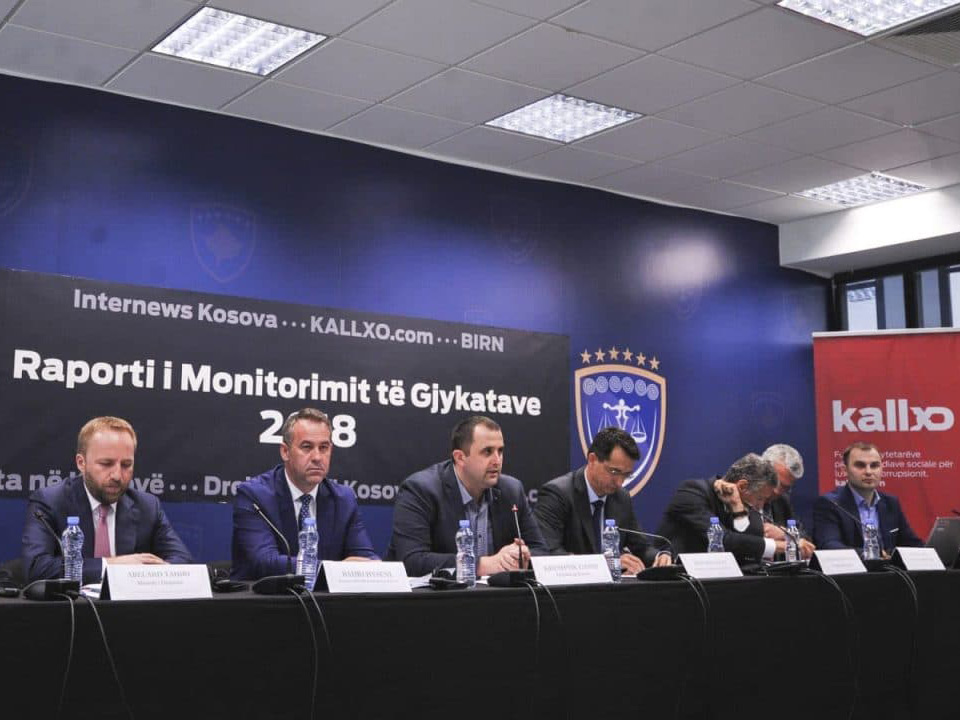 All the result show that there is a deterioration in the fight against corruption in terms of the number of accused persons as well as in the number of punishable verdicts.

New guide supplies Balkan journalists with range of ways to use Open Source Intelligence in their research. 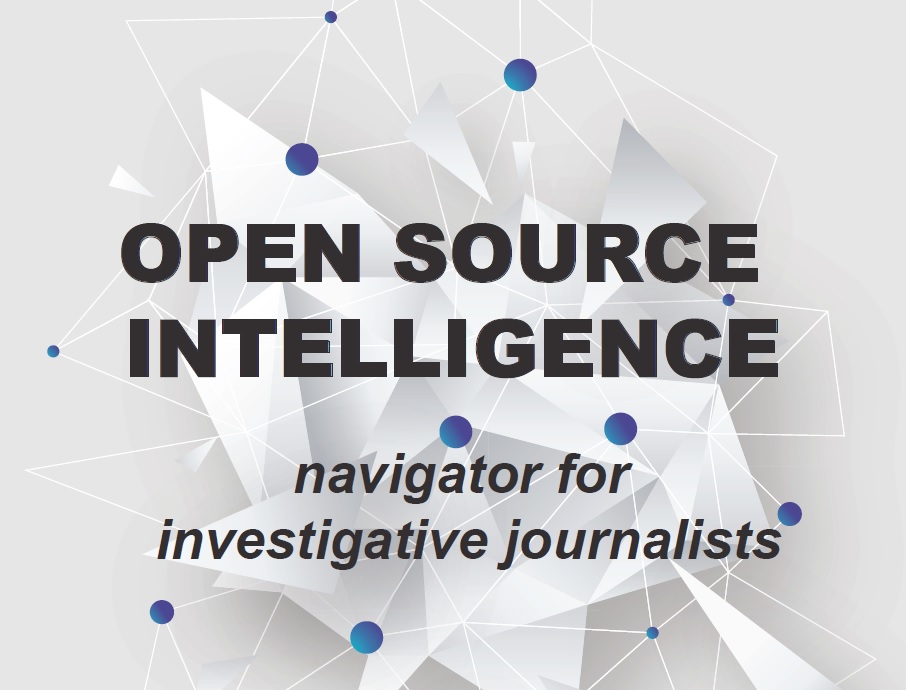 The guide is designed to assist journalists in their research and investigations, especially with regard to Open Source Intelligence techniques. It supplies a variety of tools for documenting, archiving and operational security, provides ways to navigate search engines and social media and track people, assists with image verification, geolocation, searching different corporate registers and metadata research, and with exploring the “dark web”, as well as data handling.

The Open Source Intelligence training and development of The Navigator are part of GIZ’s Global Program, in its Governance and Human Rights Section, done in cooperation with BIRN, supporting investigative journalists from the Western Balkans in the global fight against illicit financial flows.

The Annual Reports provide an overview of BIRN Kosovo’s activities throughout the given year.
The Financial Reports contain data on BIRN’s finances during a year as audited by an external certified auditor. 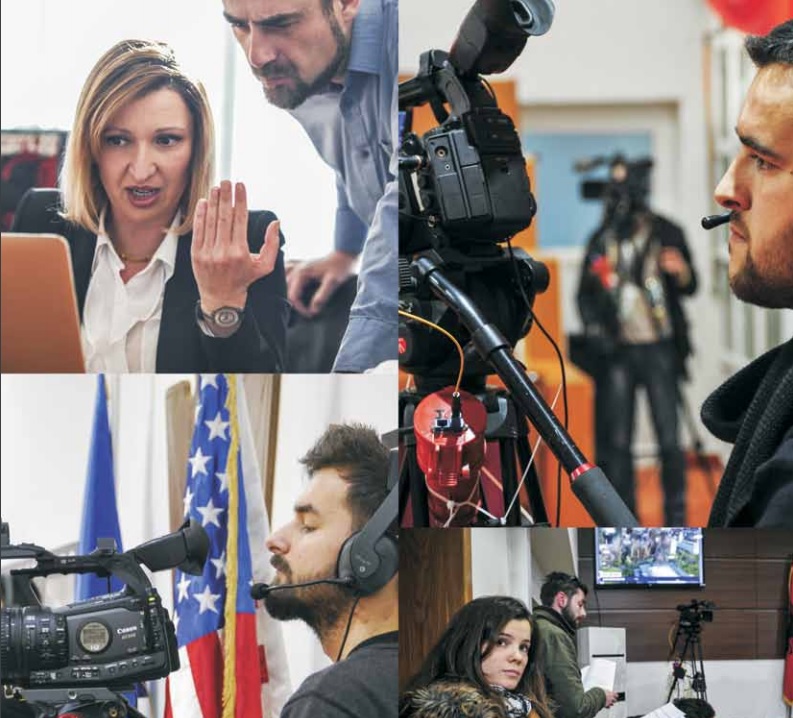 The Balkan Investigative Reporting Network in Albania has published a report entitled ‘Analysis of the System of Asset Declarations of Mayors in Albania’, which evaluates the wealth of the heads of local government units in the country as well as the integrity of the asset declaration system. 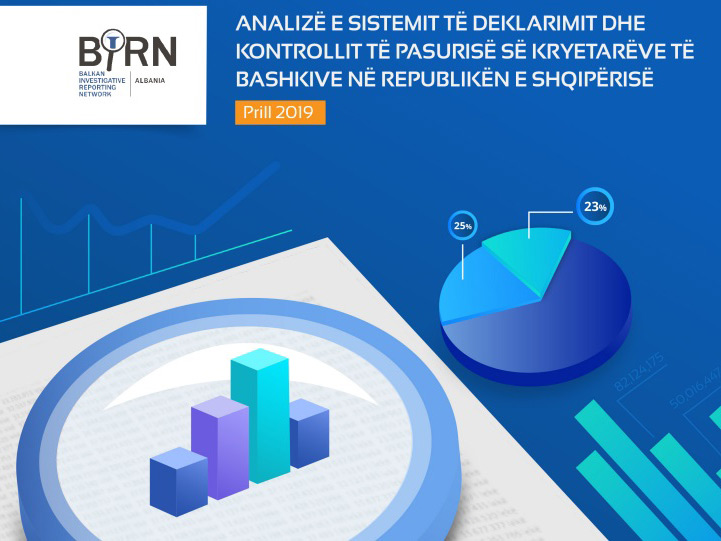 The asset declarations of serving mayors were analysed with the help of three financial experts, who recorded and categorised in a database all the data declared by heads of municipalities in their annual asset disclosures.

The Balkan Investigative Reporting Network in Albania on April 25 published a national report entitled ‘Local Government Under the Lens of Freedom of Information: A Comparative Monitoring of Transparency Indicators Online and On the Ground’, covering all 61 municipalities in the country from 2017 to 2019. 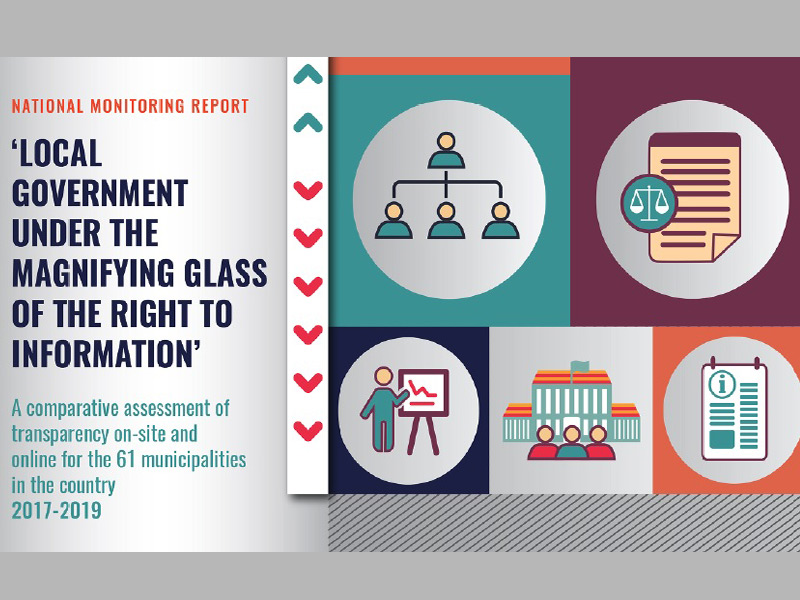 The report contains assessments of the transparency of the 61 local government units in Albania, based on 55 indicators, evaluated in both 2017 and 2019, tracing the progress made by local municipalities in the implementation of freedom of information and public consultation laws.

For a copy of the report in Albanian click here.

For a copy of the report in English click here.

Monitoring report entitled ‘Carving up the Pie’ has been produced as a part of the Monitoring of Recruitment Processes of Senior Managing Positions project that BIRN is implementing in cooperation with the British Embassy in Kosovo. 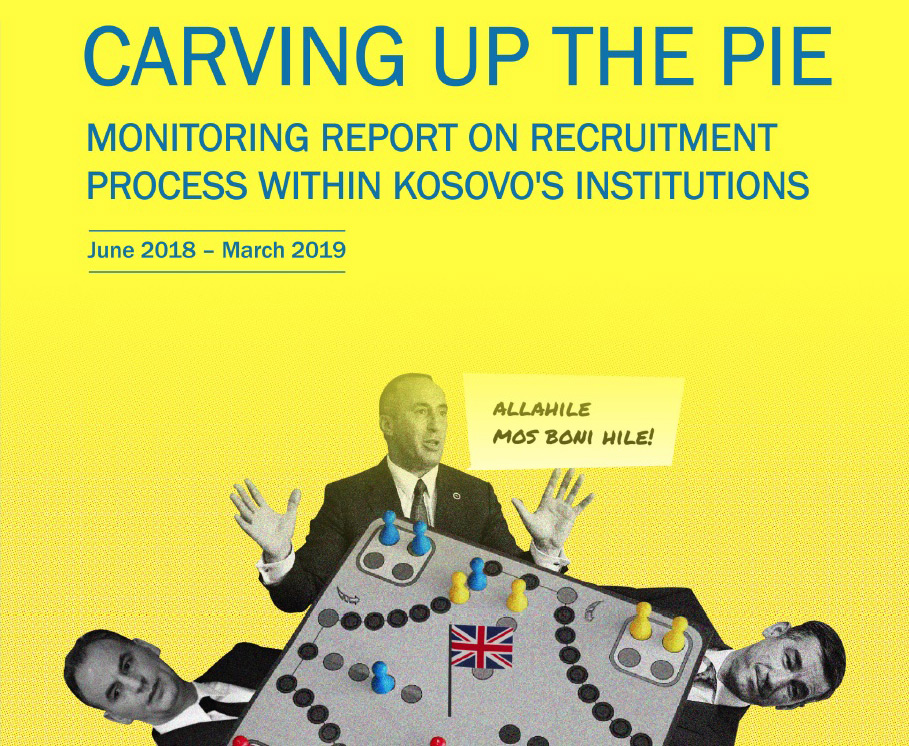 The report finds that Kosovo institutions have failed in implementing an agreement signed with the British Embassy by appointing people to senior positions who did not meet criteria set by an assessment by British experts.

The purpose was to support joint efforts to ensure independence, meritocracy and professionalism in the process of recruitment for senior management positions in the civil service and on the boards of public enterprises. 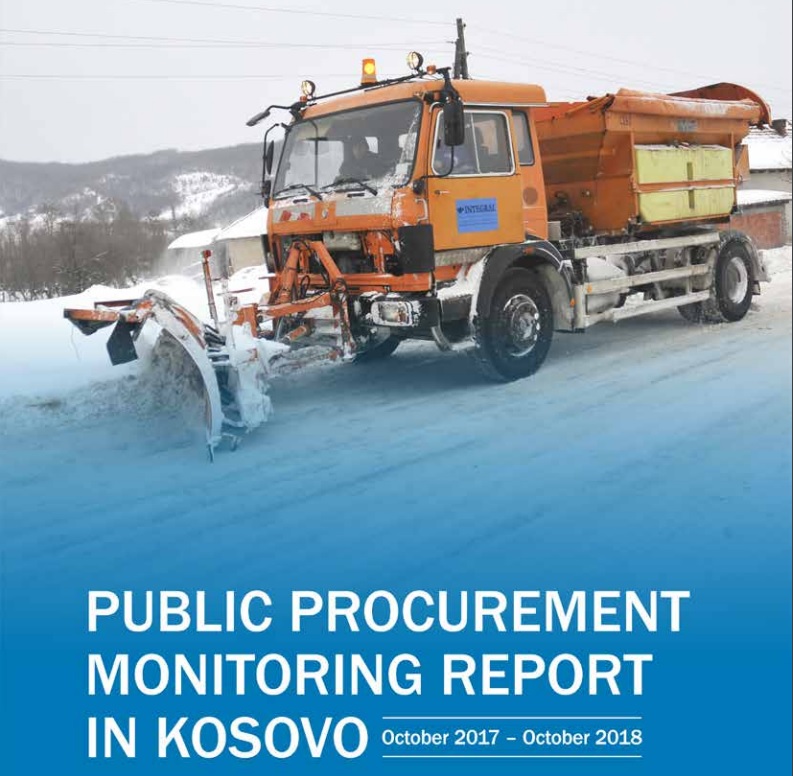