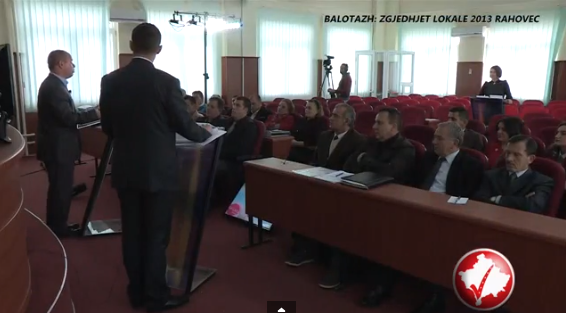 PDK’s candidate running for Mayor of Rahovec, elaborated his main projects wich among others include the Regulating Plan for the urban part and biggest villages of the municipality, Krushë e Madhe, Xërxë and Ratkoc,improving drinking water problem within the city of Rahovec, expanding the drinking water system in the villages, building of a new school in the Opterushë village, building two physical education halls in the schools of the villages Xërxë and Krushë të Madhe, and building a new building for the families of war martyrs etc.

On the other side, AAK’s candidate, Smajl Latifi choose to elaborate his priority projects through experts of differnet fields, who promised to resovle to drinking water problem which will cost approximately EUR 387.000, a project foreseen to be funded party by the municipality while the rest will be funded through different donors.

The experts representing candidate Latifi also promised implementing a project on the draining system of agricultural lands in the villages Gexhë, Malësi e Vogël and Ratkoc, which will cost approximately EUR 497.000.
Financing of the project is expected to be shared between the municipality and Ministry of Agriculture; villages Celinë and Fortesë will be part of the second draining channedl which will cost EUR 437.000; the construction of the irrigation system of villages Opterushë and Zeqishtë amounting to EUR 170.000 also to be financed by the Ministry of Agriculture and the municipality; construction of the economical zone in the vilalge Opterusht, where about 50 small bussineses will be placed is estimated to cost about EUR 445.000, which is a joint project with the municipality of Suhareka.

When moderator Jeta Xharra asked the candidates on naming three artists coming from this municipality, neither of them were able to answer, only saying “there are lots of artists”, while the same silence was spotted also when they were asked what was the last theatrical play or cultural event they went to in Rahovec. However, Smajl Latifi said that within one year he will support the culture with about EUR 50.000.

When asked what they want to leave as legaly to be remember by their constituents, PDK’s Vehapi said that he want to be remembered as a good manager, good Mayor and a responsible and concious Mayor.

On the other side, AAK’s Latifi said that he wants to be remembered for the investements he made especially those related to economic development but also as a Mayor who kept and cultivated national values.