During the run-off debate, Eqrem Kryeziu, LDK, former mayor of Prizren municipality for seven years (2000-2007), promised several municipal projects in the quest of improving the lives of citizens of this municipality. Ramadan Muja, PDK, the mayor in the last mandate was not present in the debate. 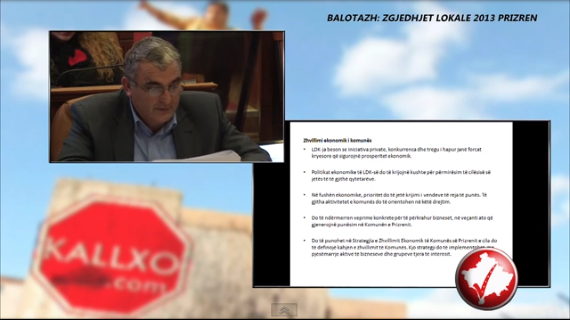 Specifically, he pledged that he will improve the situation with water supply, promising to change the existing pipes. He added that he will stop illegal construction in the old part and the historic part of the town.

“Buildings that have acquired the licence, but are situated in this area will be demolished and reimbursed from the municipality and no further illegal construction will be allowed in this area,” pledged Kryeziu.

He also presented his plans for increased parking spaces and an underground parking area to be build through a public-private partnership.

Kryeziu promised that no nepotism will be tolerated in municipal services and that he will focus on collecting accumulated debts towards the municipality.

A business park was also pledged during the debate, where 80 factories employing four thousand people will be located there.

Kryeziu also spoke about his plans with regards to road infrastructure, including the 2.5 kilometer Prizen – Landovica road, which will cost 2.5 million euro.

The healthcare expert from Kryeziu’s cabinet said that healthcare will be a priority in the upcoming four years. In this regard she revealed the four main priorities: decrease in illnesses and mortality rates, quality services, medical equipment in line with European standards and a sustainable financial system. She noted that the Family Medical Centres around Prizren will be renovated too.

Kryeziu did not promise anything with regards to the city fortress, however, he added that youth will be one of his primary focuses, offering double the funds offered to Dokufest International Short Film and Documentary festival from the previous mayor, amounting to a toal of 60 thousand yearly.