Shaip Surdulli from LDK and Begzad Sinani from PDK were two candidates present during the first round of “Life in the Municipality” debates in Kamenica. During the debate, both politicians said that the elections on November 3 were part of a democratic process. 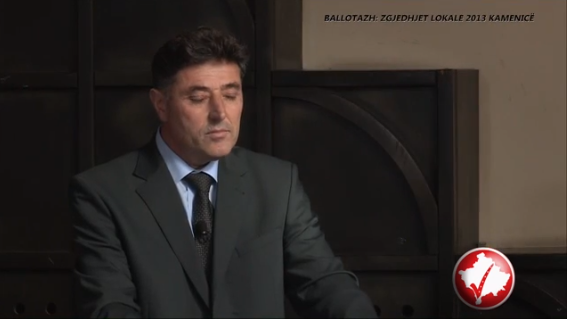 The confrontation between the two was tense because Sinani asked Surdulli to apologize for the case that was opened to the court against him for misusing his official position as mayor. The court exonerated him.

“I have no reason to apologize because I still believe that Sinani misused his position. I respect the court’s decision, but it doesn’t affect my conviction, which is based on facts,” said Surdulli.

During the first part of the debate, the candidates were faced with the promises given during the debate ahead of the first round of elections. During the second part, they presented their projects through slides.

Shaip Surdulli presented the water supply factory project for the villages Rogan, Muqiverrc, Hodonovc, Dajkovc. For this project he promised to allocate 587,000 euro and declared that it will be completed within the first year.

Another project was creating a canal in the Korretin village, which will cost 170,000 euro. Surdulli also promised to build a school in the Rogan village, which would cost 900,000 to 1 million euro and be sponsored by the EU. The school will take two years to build. His other projects include building an athletic field, which costs 30,000 euro and the stadium’s restaurant in Kamenica which will cost 45,000 euro.

The total cost of the LDK candidate’s projects is 2.45 million euro.

Sinani also promised projects for Kamenica. His priorities were focused on fixing sidewalks in the center of the city, costing 38,000 euro. Another priority was providing water to families living in upper floors of apartment buildings, which costs 17,000 euro. Also, he promised to repair the apartment building roofs with a cost of 38,000 euro, the promenade with a cost 38,000, fix the park behind the Social Work Center with a cost of 21,500 euro, resolve the greenhouse property problem, construct the business park with a cost of 110,000 euro and maintain green areas for four years costing 45 euro.

Another project involves the Malesia neighborhood, where main priorities are fixing the roads, public lighting and the athletic field near the school. These projects add up to a cost of 380,800 euro.

Reconstruction is also being planned in the Cameria neighborhood, which includes fixing road infrastructure, sewer systems, public lighting, maintaining the cemeteries, and the creation of a sports field. This project will cost of 101, 500 euro.

Sinani also has a project for the Iliria neighbourhood, which involves fixing sidewalks, improving the water supply, fixing the Ramadan Kastrati and the Adem Jashari roads, public lighting and reconstructing the stadium. The following changes are expected to cost 348,500 euro.

According to the plan for Kamenica drafted by PDK, the Rubovci village will also be included in building sidewalks, fixing the roads and public lighting. Expected to cost 56,700 euro.

In the Busavad village, PDK will invest in sidewalks and public lighting costing 59,800 euro. In the Berivojc village, money will be invested toward improving the riverbed, school and sidewalks, costing 312,500 euro. In this plan, the Koretin village will be improved including the river bed, school, sidewalks, public lighting, costing 600,000 euro.Projects in the Topanic village will cost 223,700 euro, 106,000 euro in Hodonovc, 286,000 euro in Rogane, 135,000 euro in Muqiverc, 26,500 euro in Shipashnice e Poshtme and 263,000 euro in Shipashnice e Eperme.The total cost of investments for Sinani is 3,800 thousand euro.

Sinani coming in with 55.1 percent of votes was the winner of the second round of elections held on December, 1 in the municipality of Kamenica.