The current Mayor of Ranilug avoided BIRN’s debate by saying that he is in Greece, while BIRN’s moderator, Ivana Stevanovic, confirmed that the mayor, who was running for Serbian Citizens’ Initiative is in fact in Kosovo. 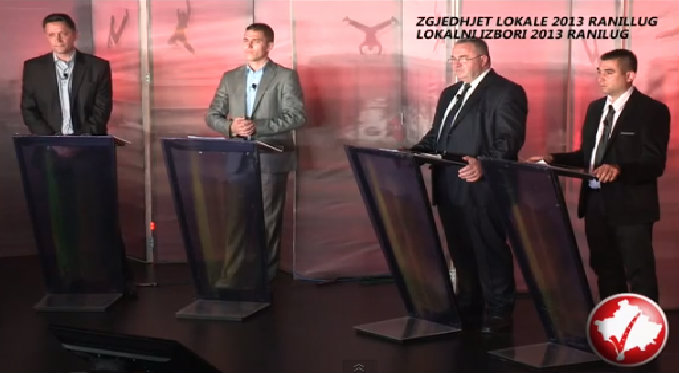 Perica Andjelkovic, president of the Za Kosovsko Pomoravle party, said that one of his main priorities is to create a society with a good environment for investments and that he would have a particular focus on protecting local products.

On the other hand, the president of Srpska Narodna Partia Kosova, Milan Aritonovic said that the reason he should be elected is because his political party was established in order to promote the youth. He added that his party has brought business owners from Germany and Switzerland who are willing to invest in Ranillug.
He continued criticizing the current government by saying its decisions are having negative effects on citizens on a daily basis.

Igor Mitic, who is running for Social-Demokratia, declared that his party is strong enough both at the local and central level as well and that he has the unconditional support of two ministries of Kosovo’s Government, that of Labor and Social Welfare and that of Sports and Culture. He emphasized that Minister Rasic has made it very clear that there is political will to employ youth and that they won a 72 million euro donation from the EU in the amount of 72 million euro, 80 million euro from the Swiss government and many others.

The candidates noted that many investments have been done in the area of drinking water, but there are still severe water shortages. According to Aritonovic, all pre-school institutions that work under the parallel system of Serbia face a lack of drinking water and are relying on private sources, which he promised to solve if he wins.
Radovic Zokic on the other side promised that every village would have drinking water, same as Igor Mitic but they did not provide concrete or clear plans on how they would achieve this.

In the village of Pancele, the construction of a church had started but due to property rights issues raised by the Privatisation Agency, construction was halted. Candidates promised to expropriate this property in order to have the church built, while Aritonovic proposed to change its designation as a public toilet if an agreement cannot be reached on the original designation.

Igor Mitic declared that in order to fix the sidewalks the municipality needs about 300,000 to 400,000 euro, and that the budget would be secured through the integration of Serbian municipalities but that the state of Serbia could invest as well.