During BIRN’s local elections debate, three out of five candidates seeking the seat of the Mayor did not allow their families to talk about them to BIRN’s  crew. This debate was filmed without audience due to the huge number of people wanting to get in a limited seats building and the lack of possibility to discipline them. 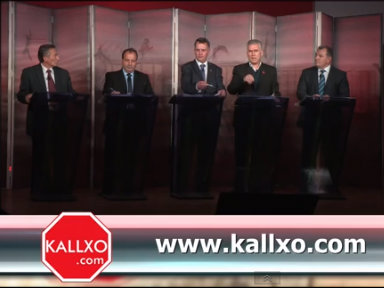 This debate saw only the families of the current Mayor of Lipjan, Shukri Buja, who is running for a third term and Vetevendosje’s candidate, Rabit Konjufca, agreeing to be interviewed about the candidates, while the other three refused to do so. In their first two minutes to present their electoral programmes, all the candidates focused their speeches on strategies for economic development, tourism, agriculture and some also talked about youth.

While PDK’s Shukri Buja said that his priority would be infrastructure, youth and environment, Vetevendosje’s candidate, Rabit Konjufca, promised to create room for diaspora to invest in Kosovo, LDK’s Imri Ahmeti focused on economic development, health, agriculture and education, and Fitim Selimi from the coalition of AAK, LDD and Civic Initiative for Lipjan promised to protect the environment and fight against corruption.  On the other side, Bastri Demiri from the Alliance for Lipjan said that he is in touch with 12 investors who are going to employ 4,500 people in four-year’s time.

This debate was particularly dynamic and heated due to many interesting questions sent by hundreds of citizens to www.kallxo.com and posed by Jeta Xharra.

Shukri Buja tried to justify his unfulfilled promise to build a roundabout, which he had made in previous elections, blaming the minister of infrastructure. LDK’s candidate, Imri Ahmeti said that even that he has lost elections three times already, he was not giving up.

Bastri Demiri,  who left LDK to become an independent before rejoining and leaving the party again to establish the Alliance for Lipjan, said that he acted this way because LDK did not respect his political programme. Fitim Selimi who acted similarly and moved from PDK to run for the coalition of AAK, LDD and Civic Initiative said that he still respects PDK.

Problems of residents of Magure and Medvec village with the drinking water, the increased number of municipal directors, central heating, the lack of a bus station, were among the main problems discussed among the candidates.