Junik’s current mayor, AAK’s Agron Kuqi, facing a relative, Nimon Tofaj, of PDK, in his re-election. They would not allow BIRN’s journalists film in their familial environment.  BIRN’s electoral also featured Zenun Shala, from LDK, and Rexhep Pepshi from Vetevendosje. 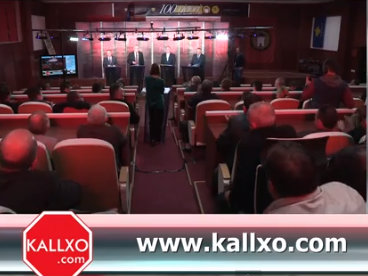 In the scope of BIRN’s electoral debate with the candidates of Junik in their first two minutes, candidates provided very general promises on how they will improve the current situation of this municipality, which has only six thousand inhabitants and a budget of 1.5 million euro. Nevertheless, the candidates promised solutions in very general terms for the many problems this municipality faces but without going into concrete alternatives on how to provide better living conditions for citizens.

The current mayor was put in an embarrassing position many times, especially when the host, Jeta Xharra posed very specific questions that came in through kalxo.com by Junik’s citizens. He was not able to answer why he has built in the hills of the municipality, which have been declared a national park. Furthermore, he was also asked why he didn’t pay for a 50-cent ticket to watch the football game between Junik and Ferizaj on March 23, 2013.
Other candidates were put in a similar position such as LDK’s Zenun Shala who has not paid the local tax for his business. PDK’s Nimon Tafaj had to explain the fact that his son’s company has won many tenders through his four-year term as vice-president of the municipal assembly, including janitorial and clearing tenders for which they are not specialized.

A heated discussion between the candidates followed on the health situation of Junik’s citizens, including the building of a Family Health Centre, which was built last year but has started to collapse. On the other side, all candidates promised to build a new culture house, but were not able to say where the money would come from.