The current mayor of Partes, who is running again for SLS, convicted in 1997 for the rape of two young women, showed up for the debate but did not take part in it. He tried to interfere with the TV direction of the programme by requesting to put an empty chair for Dragan Nikolic from the Serbian Civic Initiative, a request that was rejected. 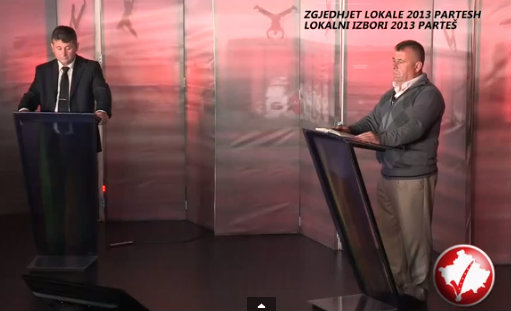 The producer and TV director of Jeta ne Kosove, Faik Ispahiu said that “Cvetkovic refused to take part in the debate because we didn’t put an empty chair for other candidates, even that we explained to him that the format of the programme is such that the moderator emphasizes the absence of one candidate and the reasons behind such a decision.”

Hence, the debate in Partesh was held only between two candidates, Goran Milosevic, of the Democratic Initiative and Obrad Sosic from the People’s Initiative.

The debate saw discussions about many constructions happening without any plans, the lack of usage of the building that was destined to be used as a hospital and the very poor cultural life of Partes.

The candidate of the Democratic Initiative, Milosevic who is a vice-president of the Serbian Social-Democratic party since its establishment and municipal assembly member since 2010, has finished only secondary school, while his counterpart in the debate from the People’s Initiative, Sosic is new to politics and works as a municipal inspector of the Republic of Serbia in northern Mitrovica.

A building destined to function as a hospital in the village of Pasjan, continues to remain closed, due to the lack of necessary equipment, according to Miloshevic. On the other side, Sosic said that in order to make the hospital functional, money and political will are needed, and if he gets elected, he would try to put the building into use.
The candidates promised to put efforts into the revitalization of the cultural life in Partesh, which is otherwise very poor.