Three out of six candidates running for Mayor of Vushtrri that took part in BIRN’s electoral debate, Muharrem Shabani, AAK, Xhemajl Pllana, Vetevendosje, and the current Mayor, Bajram Mulaku, have run the municipality before. They were very harsh towards one another and the whole debate was very heated. 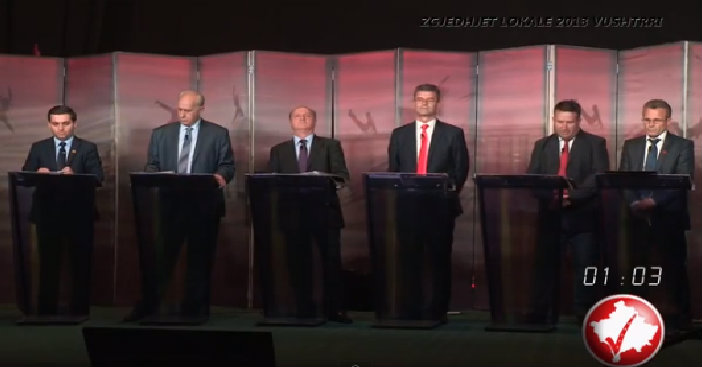 This debate was held without audience in the building due to Kosovo Police not respecting its contractual obligation and BIRN staff alone being not able to control the crowd of about 500 citizens waiting to take part in the debate.

The following candidates are running for the position of the Mayor of Vushtrri, Xhemajl Pllana from Vetevendosje, Muharrem Shabani AAK, Bajram Mulaku, PDK, Refik Ramaj, LDK, Abdullah Klinaku from the Justice Party and Remzi Selimi from Levizja per Bashkim.

In their first two minutes to present their electoral programmes, the candidates promised economic development, to fight against corruption, a good business environment, and others. Klinaku from the Justice Party promised professionalism and an uncompromised fight against those who break the law, Mulaku of PDK promised sustainable economic development, Shabani from AAK promised transparency and accountability while Ramaj from LDK promised to improve business conditions. Pllana from Vetevendosje promised to end the bad governance and corruption while Selimi promised to improve the living conditions of the citizens of Vushtrri.

The specific questions sent by hundreds of citizens on kallxo.com and that were asked by host Jeta Xharra, intensified the debate. While Klinaku promised to decrease municipal expenses, he was asked how would he do that, when he drives an official car of the Ministry of Health on daily basis, in his capacity as an adviser to the Minister of Health, to which he replied that he sometimes uses public transportation as well and to sound more convincing he even mentioned the prices of tickets for public transportation.

With Mulaku undergoing a trial for abuse of official duty and authorization, he was asked if it was ethical for him to run again while undergoing a trial, to which he replied that is innocent until proven guilty. Shabani and Xhemajli were asked whether they would change their political parties again, having done so previously, while Rama and Selimi were asked what had they done for the municipality of Vushtrri, because many people in the city don’t even know them.

Klinaku’s father, who spoke about his son, said that Mulaku main attributes are his moral, and legal capacities and his humanistic tendencies to help others while Mulaku’s wife said that he loved to eat traditional food but that he is not skilled in kitchen, barely knowing to make coffee.