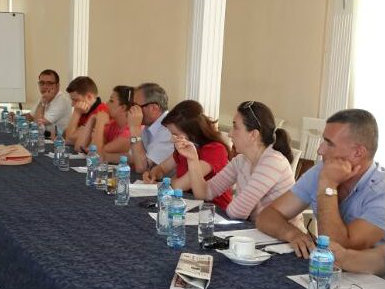 It was the first in a series of seven roundtables, part of a programme called ‘Exposing Corruption in Albania’, which is financed by the Open Society Foundation in Albania (OSFA) and the Balkan Trust for Democracy (BTD).

The project aims to expose corruption cases in eight different sectors: the environment, the judiciary, education, public administration, local government and organised crime, by bridging the gap between journalists and CSOs, and by providing a solid basis for collaboration in exposing abuses of power.

About 20 representatives of non-governmental organisations and journalists debated the possibilities of working together on important issues for the environment but also for ordinary people.

The NGO representatives underlined that there are many environmental problems in Albania that the topic should be a ‘gold mine’ for investigative journalists.

They listed dozens of key topics, ranging from the use of chemicals in agriculture tothe impact of new hydropower plants, illegal fishing and deforestation and answered more detailed questions about the options for research on those topics.

The journalists said that they were interested in writing investigative stories on the topics that the NGOs highlighted and both groups agreed that closer cooperation between CSOs and the media was necessary to tackle complex issues.