Only four of 16 agreements between Belgrade and Prishtina reached in Brussels since 2011 have been fully implemented, shows the most recent report by BIG DEAL, a civic oversight initiative on the Kosovo-Serbia negotiations. It is the same number as observed in the previous report six months ago. 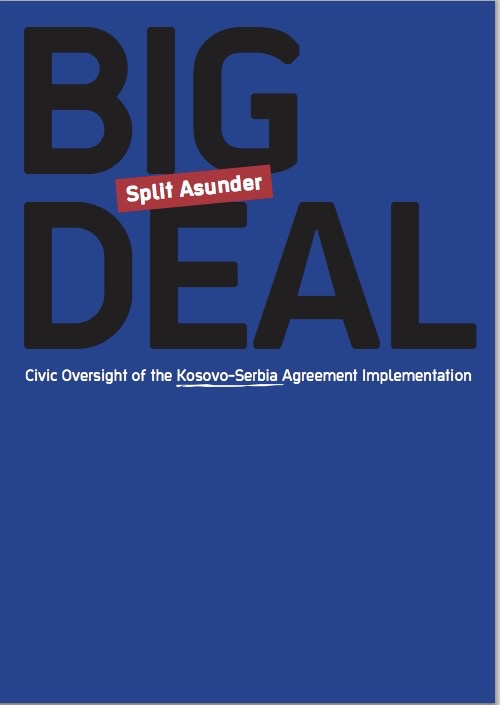 “BIG DEAL: Split Asunder” is a joint report produced by BIRN Kosovo, Internews Kosova and the Advocacy Center for Democratic Culture (ACDC) of North Mitrovica. The report finds that this six month period has been a time of division within Kosovo society over dialogue, as well as time of growth of negative feelings between the two capitals.

BIG DEAL calls on Prishtina, Belgrade and the European Union to prioritize the so-called ‘normalisation’ process, as most of the accords reached between the sides have not been fully implemented so far.

“It is unfortunate that, similar to six months ago when we presented our first report, only four of 16 reached agreements have been fully implemented,” said Jeta Xharra, Executive Director of BIRN Kosovo.  “Four and a half years after the Kosovo-Serbia dialogue began, Kosovo and Serbia are refusing to recognize one another’s diplomas. The draft law on cadastre has been blocked for two years with no progress, and Kosovars can still use the operating codes of other countries to make telephone calls.

Dusan Radakovic of ACDC said the agreement on justice is lagging behind in implementation at a real cost to citizens.

“We need the court so northern Kosovo can finally stop being a rule of law vacuum. The judiciary is the cornerstone of any society, he said:.  Once this agreement is fully implemented, it will make it easier for the others to also be implemented.”

The report is the result of more than 100 interviews with negotiators, local politicians, journalists and ordinary citizens in one and a half years of intensive research done across Kosovo and Serbia. With an in-depth view of the current state of play in implementation, BIG DEAL aims to make the process of normalising relations a more transparent one.

“Lack of accountability in the process, where politicians are using the smallest opportunity to accuse other side for not implementing what was agreed, bring them trivial political points,” said Tanja Maksic, program coordinator at BIRN Serbia. “This pushes the prospect of normalisation further away.”

Big Deal’s third report examines the dynamics of the implementation, which has been seriously hindered by the political deadlock in Kosovo, decisions by the Serbian Constitutional Court and crises that have shifted the attention of the European Union.

“The primary progress in the last six months was in reaching agreements in August unblocking the path to implementing agreements on telecom and energy,” said Valerie Hopkins, primary researcher of the report. “There have also been agreements on the future of the Mitrovica bridge and the main elements of the Association of Serb-majority municipalities, but progress on the latter remains blocked until mid-January when the Constitutional Court will decide if the agreement is in harmony with Kosovo’s constitution.”

Big Deal is supported by the UK Foreign and Commonwealth Office in Prishtina, and the Rockefeller Brothers Fund. This is the third report in a series.