The Commissioner for Information of Public Importance handed down fines to the High Court in Belgrade and the Ministry of Justice at the end of November because both institutions failed to provide documents requested by BIRN Serbia journalists related to the arrest and extradition of Darko Saric, the alleged leader of a powerful Balkan criminal organization. 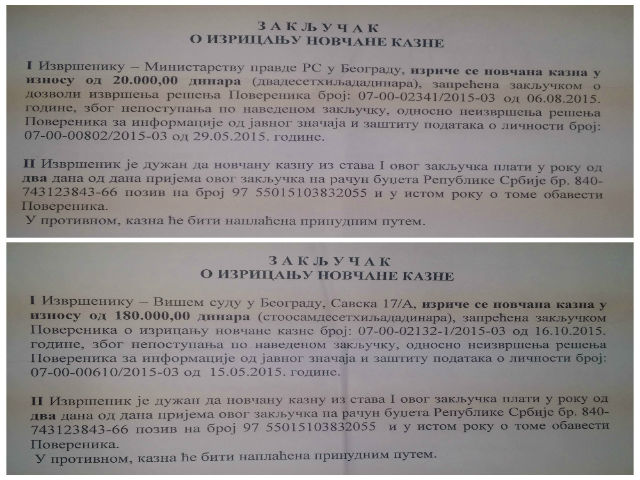 The commissioner ordered the Ministry of Justice to pay a fine of 20,000 dinars, as well as to deliver the requested information to BIRN Serbia, noting that failure to do so would result in it having to pay an additional 180,000 dinars.

The fine was imposed because the ministry did not comply with the commissioner’s decision in May this year, when he ordered the ministry to provide BIRN Serbia with documentation on Saric’s extradition.

The Higher Court in Belgrade will have to pay a fine of 180,000 dinars, because even after it was originally fined 20,000 dinars, the court didn’t make the required information available to BIRN Serbia.

If the High Court still refuses to comply with the law, the procedure will fall under the responsibility of the government of Serbia.

However, according to previous statements made by the commissioner, practice has shown that the government does not take action to resolve such matters.

BIRN Serbia requested the information and documentation from the Ministry of Justice and the High Court in Belgrade in February this year because the public still doesn’t known the circumstances of Darko Saric arrest – whether he was extradited and from which country, or if he voluntarily surrendered after his lawyer negotiated terms with the Ministry of Justice.