After BIRN/ARIJ reports lifted the lid on the way millions of fake ‘Cleopatra’ cigarettes were being smuggled into North Africa from the Balkans, Egypt’s parliament has demanded an official probe. 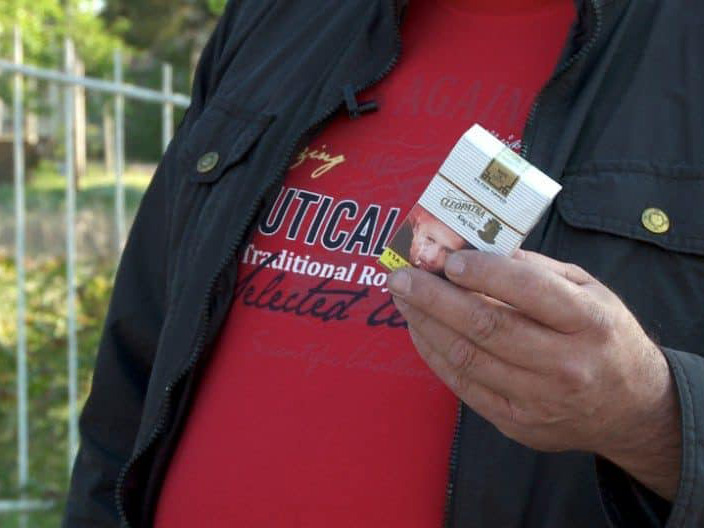 A worker stands outside the DKP cigarette factory, Podgorica, with a packet of Cleopatra with Egyptian health warnings (ARIJ).

The Egyptian parliament’s Industry Committee has urged the country’s state prosecutor to start a criminal investigation into cigarette smuggling – after a series of in-depth investigative reports published by BIRN/ARIJ revealed that the country’s most popular brand was being mass-produced and smuggled in from the Balkans.

The committee said prosecutors needed to look into whether Eastern Company managers had neglected to stop the flow of counterfeit cigarettes from Montenegro and Albania into the country.

“The defaulters [must be held] accountable for what they did due to inaction and not guarding public money, and so the subject should be referred to the General Prosecutor to investigate it and find out the truth,” the committee said in the official report obtained by BIRN, issued in February.

A series of BIRN/ARIJ reports in December 2018 detailed how both state-owned and private factories in Albania, Bosnia, Kosovo, Montenegro and Greece were involved in a contraband business that has netted vast profits and cost a number of countries significant losses in tax revenues.

Egypt’s No 1 brand cigarette, Cleopatra, was born in 1961 when then ruler Gamal Abdel Nasser asked for a local version of the smuggled American Kent brand that he liked to smoke. Created by the Eastern Company, Cleopatra is now one of the most widely smoked cigarettes in North Africa and a top seller globally.

The BIRN/ARIJ investigations noted that Egypt, the UK and the EU’s anti-fraud office, OLAF, had considered the flow of cigarettes coming out of Montenegro’s Duvanski Kombinat Podgorica, DKP, “counterfeit”, suspecting they were being channeled to Libyan smugglers who distributed them illegally across North Africa.

Egypt asked repeatedly through diplomatic channels for Montenegro to shut the operation down.

Production did stop finally in 2016, but only after the factory was privatised and came under new ownership.

But the offshore firm that contracted the factory to produce the cigarettes has not given up, according to the BIRN/ARIJ investigations; it set up new production lines in Kosovo and invested 1 million euros in a new operation in Montenegro.

Muhammad Faud, a member of the Egyptian parliament, told the hearing that Eastern’s management had not protected the local Cleopatra brand, which had led its products being counterfeited in Albania and Montenegro.

This had “led to a waste the public money” he said, and to “falsified Cleopatra products that were not manufactured by the Eastern Company taking about 30 per cent of the market”.

Eastern’s parent company, Chemical Industries Holding, has insisted it has done its best to protect the brand. It said registering as many as 548 special trademarks around the world would have cost billions.

It also said that it had a complete dossier of exchanged communications between it and the Foreign Ministry, the Ministry of Trade and Industry, and the Egyptian embassy concerning measures taken to stop violations of its trademark and the manufacture of fake Cleopatra cigarettes.

“As a result of the efforts made, the factory producing forged products in Albania was stopped in 2015 for one year, but later started functioning again,” the company said.

The BIRN/ARIJ reports said the counterfeit cigarettes would have been virtually indistinguishable from the originals produced by Eastern Company in Cairo.

The labels bear the words “Made in Egypt”, as well as Egyptian health warnings and a claim to be produced by “Eastern Company”.

The BIRN ARIJ reports said increased taxes on cigarettes in Egypt from the 2010s onward had created a booming black market for the product.

Meanwhile, lawlessness in neighbouring Libya since the 2011 overthrow of dictator Muammar Gaddafi has turned the country into a smuggler’s paradise.