On September 21, 2011, Kosovo’s leading investigative journalist and host of “Life in Kosovo” current affairs debate programme on public television RTK, Jeta Xharra, addressed the status of the media and freedom of the press in Kosovo at the United States Institute of Peace, USIP, in Washington. 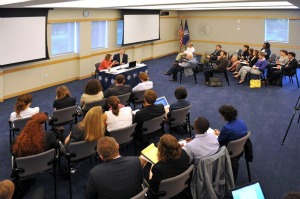 Xharra discussed issues such as the ramifications when a journalist broadcasts and discloses information about powerful individuals including leading politicians and businessmen.

She further addressed the concern on whether Kosovo’s justice system can protect journalists from death threats and intimidation, problems that have marred journalism in Kosovo since after the war. In addition, the importance of international actors to preserving media freedoms and the role that EULEX played in protecting freedom of the press was also debated during the lecture in Washington.

The lecture attracted attention from an audience of Balkan experts and representatives of different institutions based in Washington DC, who participated in discussion by raising questions and sharing experiences from their countries related to the freedom of press.

“The United States Institute of Peace is a good forum for journalists from all over the world. It enables them to share their experiences of freedom of press in their countries,” noted Xharra.

The lecture was followed by Xharra’s 10 min interview in the Albanain section of the Voice of America.