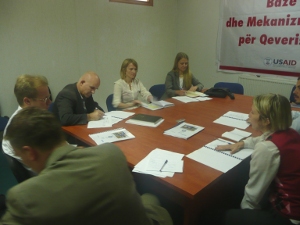 The roundtable discussion was moderated by Jeta Xharra, BIRN´s director. The participants were:

Pfeiffer opened the roundtable by giving a brief introduction to the vital importance of getting Kosovo engaged with the international community on climate change and where it fits in on this issue. Pfeiffer explained the reasons behind the Copenhagen conference in December – replacing the ailing Kyoto Protocol with a new comprehensive protocol that seeks to enhance action on climate change from 2012. The potential opportunities open to Kosovo at the Copenhagen conference were also explained.

The participants discussed Kosovo’s options to reduce CO2 and other green house gas emissions (that lead to global warming), which are mainly emitted from Kosovo´s lignite power plants, but also from cars and as a result of deforestation. Technologies such as carbon capture and storage, cogeneration, and voluntary carbon emissions trading would provide ways in which Kosovo could in the future work towards reducing CO2 and GHG emissions.

The participants stressed the current lack of awareness, political will, financial resources and human capacity to effectively do anything about climate change. These would need to improve for action to be successful. But participants acknowledged that environmental NGOs, the media and donor organisations, such as UNDP, could help to push Kosovo to act.

All participants agreed to the importance for Kosovo to become engaged on climate change. There was also consensus that the upcoming climate change conference offers a great opportunity for Kosovo.

The research was supported by Rockefeller Brothers Fund.