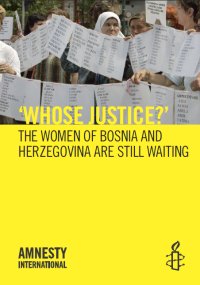 The Report is the product of year-long research conducted in Bosnia and Herzegovina. It addresses the difficult position of women who were raped during the past war, and their dissatisfaction with the poor treatment they receive from Bosnian authorities.

AI is a global movement with more than two million members, which currently leads campaigns to end grave violations of human rights in more than fifteen countries.