A panel debate, “Penal policy on sexual violence and treatment of victims”, organized on February 24 in Podgorica, agreed that too little is being done to help victims come forward. 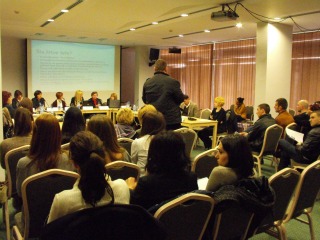 The event was attended by members of the judiciary, the police, international organizations, experts and non-governmental organizations from Montenegro and the region, as well as by journalists and criminology and journalism students from Podgorica university.

In 2011 just two women in Montenegro reported that they were victims of rape, while in 2010 a total of five criminal complaints were filed with the police concerning this crime.

This does not mean that such cases rarely happen but rather that victims remain reluctant to report rapes, it was heard.

The reason for this lies not only in penal policy but also in the low level of confidence in the institutions and the unsatisfactory treatment of victims within the system.

Participants in the debate said that the emphasis needs to be placed on changing attitudes towards victims of sexual violence, starting with the police and health department followed by the judiciary where court hearings sometimes are delayed for years.

There are also no adequate programmes for the rehabilitation of sexual violence victims and society too often blames the victims, it was said.

Maja Raicevic, of the Women’s Safe House, said to few women report rapes as they don’t know how to access information or whom to turn to.

Although by law punishments for rape range from one to 15 years’ imprisonment, the average prison sentences issued by the higher courts in Podgorica and Bijelo Polje is two years and eight months. The highest prison sentence handed down for such a crime was 11 years and the shortest was six months.

The situation in the region is similarly varied.

Sladjana Jovanovic, from the University Law School, presented statistics from Serbia from the last few years, which show that Serbia has toughened its policy on sexual violence.

One problem is that rape is a crime that is difficult to prove, while the lack of specialized services and sufficiently sensitized judges and lawyers additionally aggravates matters.

“A big problem is that the victims are inadequately cared for both outside and within the proceedings, and there are also no state services for assistance and support,” Jovanovic added.

Speaking from Croatia, Djurdjica Kolarec, from the Croatian Women’s Room non-governmental organization said their experience was that “shamefully lenient sentences are delivered for rape, sometimes even suspended sentences.

“Rapes are seldom reported – only one out of 20 women victims reports rape and of the hundred or so reported rapes a year only ten or so end in convictions,” she added.

“Many cases are simply dropped also because, in the course of the proceedings, victims eventually refuse to cooperate,” she continued.

The panel moderator, journalist Jelena Kulidzan, said Montenegro did not have a centre for the protection of victims of sexual violence. Kulidzan noted that victims of violence obtain assistance only from non-governmental organizations focusing on domestic violence.

Montenegrin Justice Ministry representative Branka Lakocevic said the country was ready to adopt best practices from the region and other countries, which was one reason why this debate was useful.

Commenting on media coverage of this topic, Professor Natasa Ruzic blamed the media for often adopting a sensationalistic approach to such crimes, sometimes even disclosing the identity of the victims.

“In a small society like Montenegro it may be better to give a false name instead of initials. But what is important is to eliminate disgusting descriptions of these crimes, which humiliate the victims and result in them reliving the trauma,” she said.

Debate participants stressed the importance of taking a systemic approach to this subject, which implies the creation of a social and institutional environment in which no victim feels discouraged to report a crime.

The debate on the subject of rape was organized by the Balkan Fellowship for Journalistic Excellence and moderated by journalist Jelena Kulidzan. Her analytical article entitled “Rough Justice for Balkan Rape Victims”, published in November 2011, won second prize in the international fellowship programme, which is awarded by BIRN, the Robert Bosch Stiftung and the ERSTE Foundation.