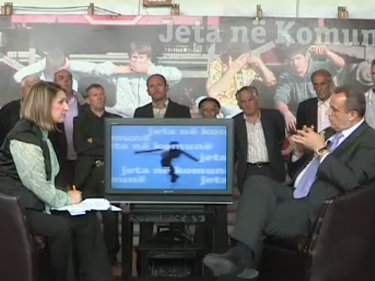 This municipality as well as other municipalities throughout Kosovo, has a series of problems. According to the interviewed citizens, the main problems of their municipality remains to be the high unemployment rate, poverty, lack of economic development and lack of electricity. Based on the research conducted by Gap Institute and BIRN monitors, 580 families in Shtime municipality depend on social services.

Despite the abovementioned problems, the municipality also faces the following issues: lack of adequate water supply, lack of kindergartens and busses for public transport and there is also a very obvious absence of activities for the young.

First, a report was broadcasted reminding the audience about the promises the mayor made two years back. The researches of BIRN and Gap Institute went to the municipality in order to see to what extent has mayor Naim Ismaili fulfilled his promises.

The promises made by mayor Ismaili had mostly to do with construction of a cultural centre and a bus station – (both?) planned as public-private partnership(s?) – as well as construction of a new school, fixing the problem with sewage and building a bridge and pavements for citizens.

Regarding the construction of the cultural centre, BIRN monitors found that nothing has been done in this direction. Failing to build a bus station is also considered a promise mayor Ismaili’s administration did not meet. This issues remains to be a major concern of Shtime citizens.

The promise to make a sewage system in rural areas falls in the cathegory of unfulfilled promises, according to a report made by BIRN and Gap Institute researchers. Several inhabitants spoke to “Life in the Municipality” and said that the municipality officials have been promising for two or three years to solve this problem.

“We hope that this year will mark the start of the sewage system construction, because we find it very difficult to live in such conditions,” a resident of Petrova village said.

Many other inhabitants complained about the poor quality of the village bridge. They said that the bridge poses a danger to car drivers since it is very narrow.

Regarding the unfulfilled promises, in particular the failure to complete the bus station, mayor Ismaili said: “since Shtime has only three main roads it is almost impossible to find a location within the city that meets the requirements for constructing a bus station.

Major added that, “in order to create a suitable space, we are currently working on the first segment of the ring road. We are dependent on the Ministry of Infrastructure because regional roads are under jurisdiction of this ministry,” he conducted.

Besides citing the projects where the municipal authorities failed to meet the promises made during the election campaign, “Life in the Municipality” left the space to speak about the works conducted successfully, something which both the mayor and the citizens of Shtime are proud of.