In the beginning, the moderator of “Life in the Municipality” firstly invited the viewers and audience consisting of civil society, journalist and opposition to watch the report which talked about what the mayor Kastrati has promised during the election campaign at the end of 2009. 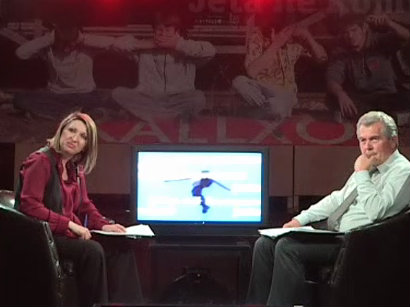 In order to see to what extent those promises have been met, researches of BIRN and Gap Institute were in the field. To show what they have found on the ground, they have prepared a reportage which clearly showed how mayor Kastrati had been meticulous in the fulfilment of promises.

Among others mayor Kastrati had promised that he will engage to release the Albanians occupied homes in the northern part of the city, but according to the researchers this thing had not happened.

Even the improvement of the infrastructure had been one of the promises of mayor, but the opposition was shown very critical about what have been done in Mitrovica municipality. In the long list of promises, made during the election campaign, had also taken place the greater care to the associations that came out of war (i.e. war veterans, invalidated soldiers, martyrs’ families) as well as the greater care for retirees – however in the Council for Defence of Human Rights and Freedoms say that they have a numerous complaints that came from citizens who belong to these categories.

On the other hand, regarding with releasing of Albanians’ usurped homes in the north part of the city mayor Kastrati said “we all are working to create conditions for all citizens who are interested to go back to their homes. It’s up to their willingness whether they want to go back in the north or not,” he said.

Besides failures of Mitrovica governance, “Life in the Municipality” has also presented the successes – among others there was presented the opportunity for online applying for documents as well as the construction of the promenade in the vicinity of the river.

The debate also included opposition representatives and citizens who expressed their dissatisfactions and critics to the mayor Kastrati.

At the end, there was broadcast the rubric “Pride of the Municipality” whereby was presented Rock School – Mitrovica as a role model for multiethnic cooperation between Albanian and Serbian musicians.