Rahovec municipality is an agriculture locality. The land in this area is suitable for planting grapes. This region has a large number of wine makers. 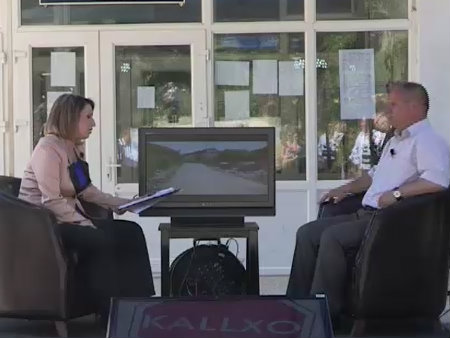 Mayor, Smajl Latifi faced criticism during the debate, which had to do mainly with his failure to fulfil the election pledges made at the end of 2009.

At the beginning, a report revealing municipality’s most significant problems was aired. According to the interviewed citizens the main problem of their municipality remains to be the lack of electricity supply.

In the absence of a power station, Rahovec municipality receives its electricity from Gjakova. The electricity reductions happen very frequently and affect the business.

The citizens of Rahovec also are concerned about municipal investments being focused only on the urban part of the municipality, with local government ignoring villages and rural areas.

In connection to this, they mentioned the investment in youth sports centre – a project which was considered significant. On the other hand, there was no investment to ensure the water supply for villages Dobidol, Çiflag, Kromovik, Palluzh, Gur and Kuq which have around 9000 residents, but no drinking water.

Citizens also expressed their concerns regarding the lack of school infrastructure and the risk of river flooding.

During the election camping, the current mayor promised better infrastructure and in general he managed to meet those promises. However, many promises failed to be realized. The municipality finished the construction of a road of five kilometres. It also succeeded to make the city park functional; despite the citizens arguing that this was unnecessary, since the city already had a park.

It is worth mentioning that the mayor has failed to implement the promises he gave about improving the situation in the sector of culture. He specifically promised to increase the book volume in city’s libraries. There is also delay in fulfilling the promises about investing in education.

The schools that the mayor, during his campaign in 2009, promised will be built, have seen just the earliest phase of construction. GAP Institute and BIRN monitors went to the municipality to see if mayor Qeska had fulfilled his promises.

One of mayor’s many promises was to improve water supply for villages of Pagasos and Çilak. Unfortunately, despite mayor’s promises, the residents of these villages continue to experience shortage of drinking water.