BIRN Kosovo celebrated the third anniversary of its television debate show, Life in Kosovo, and to promote new partnerships. 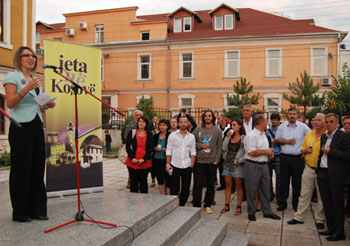 More than 400 people attended the event, including government ministers, members of parliament, mayors of Kosovo municipalities and other personalities from civil society and business.

“When we started this show, there were only three people working on it. Today, in the third anniversary, we have almost 30 people involved and that makes me proud,” said Jeta Xharra.

Enver Hoxhaj, Kosovo’s minister of education, also addressed the guests. His speech followed the screening of a BIRN televised report featuring a rural elementary school which functions without premises, in barracks and under very bad conditions, but which has launched a website that is regularly updated.

“I hereby promise that this school will be granted a computer lab by September 2008 and by September 2009 they will have a new building,” said Hoxhaj who praised the BIRN team for its investigative reporting.

“When the first debate was aired there was complete silence. The reason for this silence was because it was a complete shock since after the second broadcast I was flooded with reactions which included all sorts of questions such as what was that, where did you find her, how dare she interrupt ministers in their speech,” Zatriqi said.

BIRN’s Life in Kosovo TV show is broadcast every Thursday evening on RTK, and currently is the most watched current affairs show in Kosovo.