April 4th saw the first public lecture on fact checking at the University of Prishtina’s Faculty of Philology, Department of Journalism, concerning the “Krypometër’’ tool created by Kallxo.com. 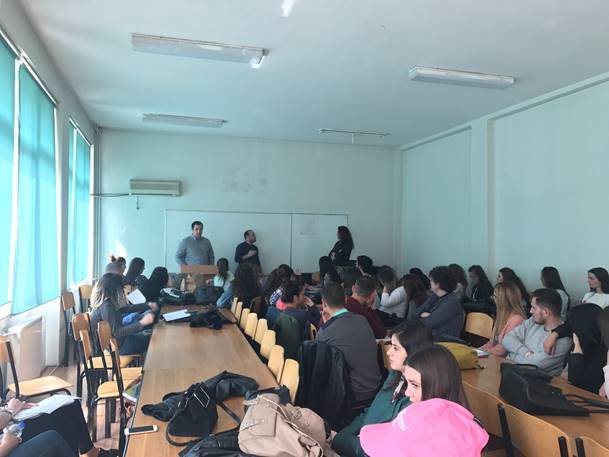 The lecture was delivered by the head of planning at Kallxo.com, author of DnK and editor-in-chief of newsletter JnK , Kreshnik Gashi and by Visar Prebreza.

The University of Prishtina and Professor Remzie Shahini Hoxhaj were partners behind this event, which included an open discussion with senior students.

Gashi opened the discussion by introducing the idea for a so-called Krypometër as a tool for fact-checking statements about politics, economics and other social aspects of life in Kosovo.

Fact checking has come to attention as a new part of global trend towards holding public figures more accountable for statements and promises they make.

The new tool was developed as an idea last year, but there were some time-consuming problems to solve first, since kallxo.com had to create a proper mechanism for weighing declarations made in the media.

Finally launched early in December 2016, the Krypometër now serves as a method of verifying and checking the statements and promises of public figures. The measuring tool has so far evaluated more than 40 such statements.

During the discussion, Gashi said the main difference between Krypometër and other media communication tools was that the Krypometër “does not judge but evaluates”. While explaining how this evaluation happens, he recalled also that citizens have a right to know the truth between the lines.

“Our President, while serving in his [earlier] Prime Minister’s mandate, promised to create 200,000 jobs vacancies in his electoral campaign but statistical figures late showed the contrary,” he noted. “When promises are made we as people need to rely on facts provided by the state institutions,” Prebreza added.

He also said no complaints had been received in regard to their fact-filtering, or about ethical violations, noting that the work takes place under the close supervision of a legal department.

More aspects of fact checking will covered in an episode of the TV show “Jeta ne Kosove” and in another lecture, at University AAB. Also, at Dit’ e nat’, an open discussion entitled “How true is the news today?” will be held opened by Faik Ispahiu, founder of kallxo.com.