Three MPs were among the six candidates for mayor of Suhareka, who appeared in televised debate held by BIRN Kosovo. MPs Bali Muharremaj, AAK, Rame Vataj, PDK and Sali Asllani from LDK, in the “Life in Kosovo” debate, tried to make a case for their candidacies even though they’ve seldom raised issues and concerns of the Suhareka citizens in the Parliament. Other candidates running for Mayor of Suhareka are Bajram Tershani from the Justice Party, Ibish Ahmeti from Vetevendosje and Nisret Hysenaj, an independent candidate. 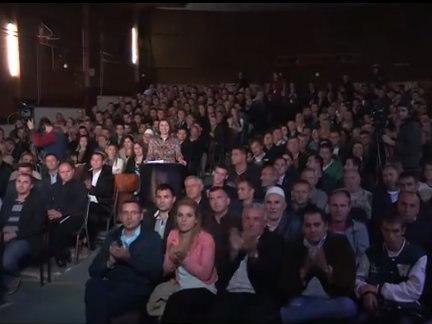 The format of BIRN Kosovo’s electoral debates foresaw candidates talking about their programmes with a time-limit of two minutes. They used the time to identify the main problems they will seek to resolve and promising citizens very general solutions to these problems.

Some presented projects without explaining where they money will come from, with some promising to try to engage donors, while others said they would rely on the central government’s budget.

BIRN debates also featured very specific and personalized questions for each candidate, which were generated from BIRN and GAP Institute reports, the  www.kallxo.com platform and social media.

The candidates avoided answering some of these specific questions. The Justice Party candidate, when asked how he would manage to run a municipality when according to a written note by the principal of the school where he teachers English, he is not able even to control 40 pupils in his classroom, he seemed embarrassed. On the other side, Bali Muharremaj from AAK, who previously was Suhareka’s mayor for a year, would not answer why during his short mandate, seven teachers were employed without public competition or input.

LDK’s candidate, Sali Asllanaj, did not answer when asked why he did not take any disciplinary measures against his cousin Ahmet Asllanaj, when the latter had struck the chief of procurement, Sefer Luzhnica.

Rame Vataj, four years ago, had promised to pave the road in the village of Savroe, which he didn’t do. When asked why, he answered that it was the obligation of the Ministry of Transport and that but that the national highway had “taken” that money.

In the end, the majority of the wives of the candidates said that they are the bosses in the house. They also talked about how close their husbands are to their children and what they prefer to eat.