BIRN Serbia and Pro Concept held their fifth national budget forum at the National Assembly in Belgrade on 27 November, where panelists and participants offered their opinions and debated the proposed 2014 budget and the projected outcomes of the Serbian administration’s budgetary policy. 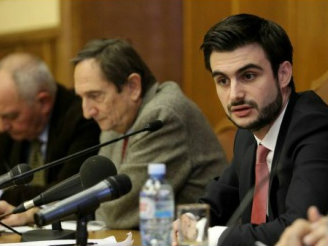 The panelists were finance minister Lazar Krstic, Pavle Petrovic, president of the Fiscal Council of Serbia, and Mihajlo Babin, assistant at Belgrade University’s faculty of economics, finance and administration.

The budget for next year is realistic and represents the first step towards the normalisation of fiscal policy because it does not make deeper cuts than necessary, said finance minister Krstic.

The minister said that a third of the budget will go to public sector employees, who number more than 740,000. He added that the government will propose a review of public administration employment.

Krstic also announced that there will be a reform of pay scales in the public sector, partly because of the budget deficit.

Responding to a suggestion from the Fiscal Council that reforms should be more aggressive when it comes to pensions, Krstic said that it was not politically possible.

Pavle Petrovic pointed to the need for fiscal consolidation, because without it, crisis is certain, he warned. He added that its aim was not to raise economic growth, but to create the conditions in which growth is possible.

”Necessary measures through which the state can affect economic growth include changes in the labour law, which have been announced but have still not been implemented, the shortening of procedures for construction permits, resolving the fate of companies in restructuring, and reforming public enterprises,” said Petrovic.

He said in 2014 alone, 560 million euro will be spent on unsuccessful public companies such as Srbijagas, Galenika, Serbian Railways, and partly on banks.

According to Petrovic, the biggest problem is Srbijagas with debts of over a billion euro, of which 800 million are owed to banks.

He stressed that it was import ant that from the middle of the next year Srbijagas, as a company which should operate with a profit, does not receive any money from the budget and begins paying off some of its debts by itself.

”Next year Srbijagas will cost 150 million euro, which is more than what is given to Serbian Railways, the company with the largest subsidies so far and more than overall government spending on science. Not only that, but it is more than the planned savings of 100 million euro by introducing a solidarity tax on salaries in the public sector,” said Petrovic.

Mihajlo Babin meanwhile pointed to the problem of ineffective financing of the public sector, as well as the problem of using up loans, with $3 billion of loan funds currently untouched.

”The key question is what the loans are used for, whether for structural reforms or not. Loans are not supposed to be taken up for covering liquidity, but to increase development. In the future, we should solve the problem of how to give up on loans that we do not need. It is better to pay the penalty now , rather than  interest later on, or to start efficiently implementing them in certain sectors,” said Babin.