Leading journalists and trainers from all over Europe have gathered in the Serbian town of Novi Sad to take part in the first BIRN Summer School of Investigative Reporting. 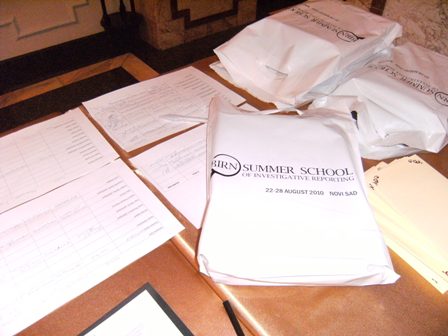 The one week programme kicked off on Monday with introductory speech of Gordana Igric, BIRN’s regional director, and guest trainers who are renowned investigative journalists including Don Ray and Drew Sullivan.
“We are pleased with the candidates and very excited to be organising this programme for the first time. I hope this school will become our annual tradition,” Gordana Igric said.
<!** Image 4 >
Don Ray, who is a multi-media producer, writer, author, journalist and lecturer has then tried to define investigative reporting – what makes it different from other types of journalism. This has been shown in a case study presented by Besar Likmeta, the editor for the BIRN in Albania, who has been talking about his investigative story named World Bank Demolished Albania Village.
Further insight on the investigative process – from getting a lead, formulating the investigative hypothesis to writing the story, fact and legal check, airing and publishing the report, follow up – has been given by Don Ray with Randall Joyce explaining how to do it for TV.
<!** Image 5 >
The OCCRP team has started its four-day programme on organised crime and corruption in order to show what are the schemes and scams that mark organised crime’s plunder of Balkan regions.
Meanwhile, another group of participants have uncovered a new world of Microsoft Excel while being trained in computer-assisted investigative journalism by Luuk Sengers.
With main focus on reporting on organised crime and corruption for print and broadcast media, the BIRN summer school is also aimed at covering the changing face of Balkan media ownership and violence against media professionals.