BIRN Bosnia and Herzegovina participated in a panel discussion about survivors of sexual violence during wartime at the WARM Festival in Sarajevo. 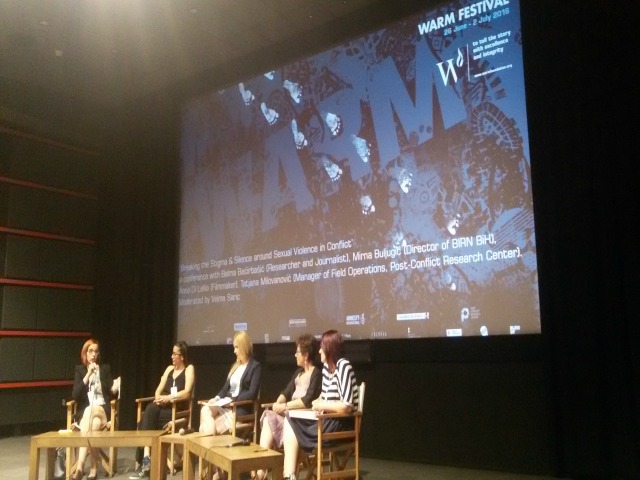 Mirna Buljugic, director of the Balkan Investigative Reporting Network Bosnia and Herzegovina (BIRN BiH), participated in the panel discussion at the Meeting Point Cinema in Sarajevo on June 27.

Buljugic spoke about the BIRN documentary ‘The Silent Scream’, which is dedicated to survivors of wartime sexual violence.

“Our aim was to initiate a debate in society on the position of victims of sexual violence and show them they are not alone and explain to them why it is important for them to share their experiences so the perpetrators will be punished,” she said.

Buljugic also spoke about the problem of the legal regulation of the status of victims, which is not harmonised in Bosnia’s two entities, as well as the lack of political support for the harmonisation of the laws.

Belma Becirbasic, a researcher and journalist, said many perpetrators were still at large.

“The fact that impunity is still a norm when it comes to sexual crimes during the conflict is one of the biggest problems,” said Becirbasic.

The film ‘Thinking of You’, about a project to help women who raped during the war in Kosovo, produced by Ana di Lellio, was screened before the panel discussion.

Tatjana Milovanovic of the Post-Conflict Research Center spoke about visual art as a strong platform for reconciliation.

“We should focus on young people in the reconciliation process, because they are the bearers of future changes,” Milovanovic said.

The WARM Festival, which was held in Sarajevo from June 26 to July 2, brings together journalists, artists, historians, researchers and activists involved in war reporting, art and memorialisation.