A story by BIRN BiH journalist Albina Sorguc on the unexplored phenomenon of Bosnian women marrying Arab men who already had wives – mostly from Kuwait, Saudi Arabia, the UAE, Egypt and Libya – echoed throughout the entire region, causing much interest and drawing reactions from the media and general public http://www.justice-report.com/en/articles/arabs-marry-bosnian-women-to-establish-parallel-families. 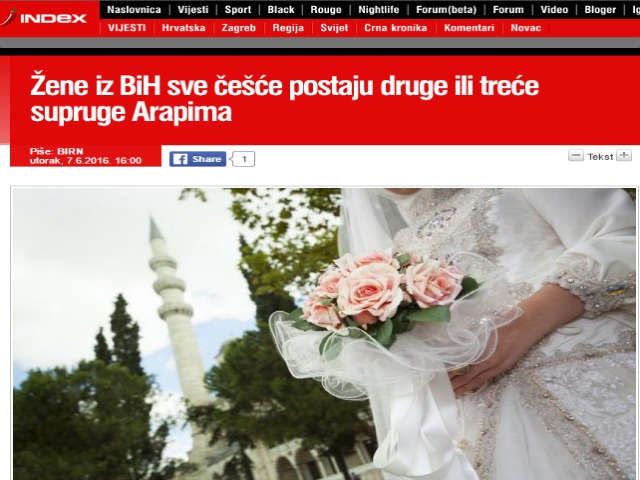 Soon after it was published on BIRN BiH’s portal, www.justice-report.com, it was republished by 169 domestic and regional print and electronic media outlets, including several daily newspapers and portals with the highest readership in Bosnia, such as Dnevni Avaz, N1, FTV and Klix.ba, as well as by Croatian Index.hr, Dnevnik.hr and Serbian Blic.rs.

According to Google Analytics, a large number of visits to the article was registered on the original platform, making it the most-read article, while analysis of its publication on BIRN BiH’s Facebook page was read by 15,000 people. The story was also published on our regional portal www.balkanisight.com, where it became one of the most read articles on the portal.

The exploration of the issue of polygamy and illegal marriage in Bosnias, as well as the increased presence and influence of Arab citizens in Bosnia, generated strong reactions on forums in Bosnia. Republication of our story on the most widely read portal in Bosnia, Klix.ba, drew the most comments over the course of one day, while the news was conveyed via the social networks of other media stations, as well as on a large number of private profiles of citizens in Bosnia and the region, all during a short period of time.

The article also prompted the most viewed regional info TV station, N1, to film its own footage on the “buying” of Bosnian wives and of sexual services by Arab tourists, which directly drew on BIRN BiH’s research. Nova TV’s magazine Provjereno, ARD’s Europamagazin and Weltspiegel have meanwhile have expressed interest in presenting the data obtained by BIRN BiH to the public.