Media and watchdog organisations in Bosnia and Herzegovina have exposed numerous scandals that have never been prosecuted, as evidenced by many investigative pieces put on display at an exhibition in Reporters’ House, Sarajevo. 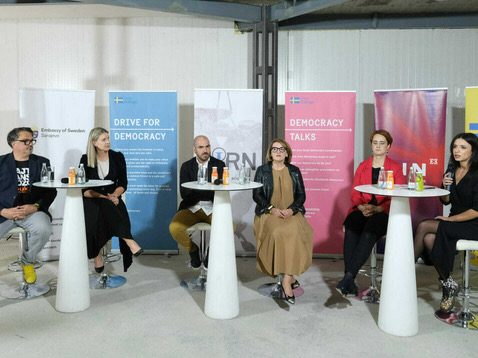 Journalists and their investigative pieces, as well as their media outlets, are often subjected to hate narratives, participants in a panel said on, “How to Protect the Truth in the Time of Disinformation?” held in Sarajevo on World Press Freedom Day.

Swedish ambassador to Bosnia Johanna Strömquist said that disinformation affected the media in many ways, adding that the current media threats include a shrinking of the democratic space, financing of the media and disinformation.
Attacks on both men and women journalists, as well as the media outlets for which they work, following publication of their articles, are common in Bosnia, and hate narratives of politicians have almost become mainstream, said BIRN BiH director Denis Dzidic.

“We see examples of the strongest investigations that do not result in what they should result in, but in polarization, which comes down to political ‘bullets’ – and that is a problem we cannot get out of,” Dzidic said.

CIN director Leila Bicakcic shared a similar view, adding that political leaders distribute the information that suits their political agendas, and, owing to a segmented public space, citizens continue to move away from each other on ethnic grounds.

“Political leaders should be sanctioned for their half-truths, because everything else will have no effect, given that we’ll just be addressing the consequences rather than the cause of the problem,” she said.

Aleksandar Trifunovic, editor-in-chief of BUKA, said the media outlet he represented had extensive experience of disinformation, recalling that some years ago the main Bosnian Serb party, the Alliance of Independent Social Democrats, SNSD, published a book listing BUKA as one of the enemies of the Bosnia’s mainly Serb entity, Republika Srpska.

“We won a court case against the publisher but the publication is still available to public,” Trifunovic noted, adding that Bosnia was fertile ground for disinformation and hate speech.

The exhibition, “30 Years of Exposure, no Consequences”, which opened before the panel discussion, displayed investigative pieces by journalists of BIRN BiH, CIN, Transparency International in Bosnia and Herzegovina, TI BiH, Kapital, Fokus and Buka – none of which prompted reactions from prosecutors’ offices or other investigative institutions.

“TI BiH filed criminal reports based on investigative pieces, its own cases and audit findings, but there was either no reaction, or a farce,” said Srdjan Traljic of TI BiH.