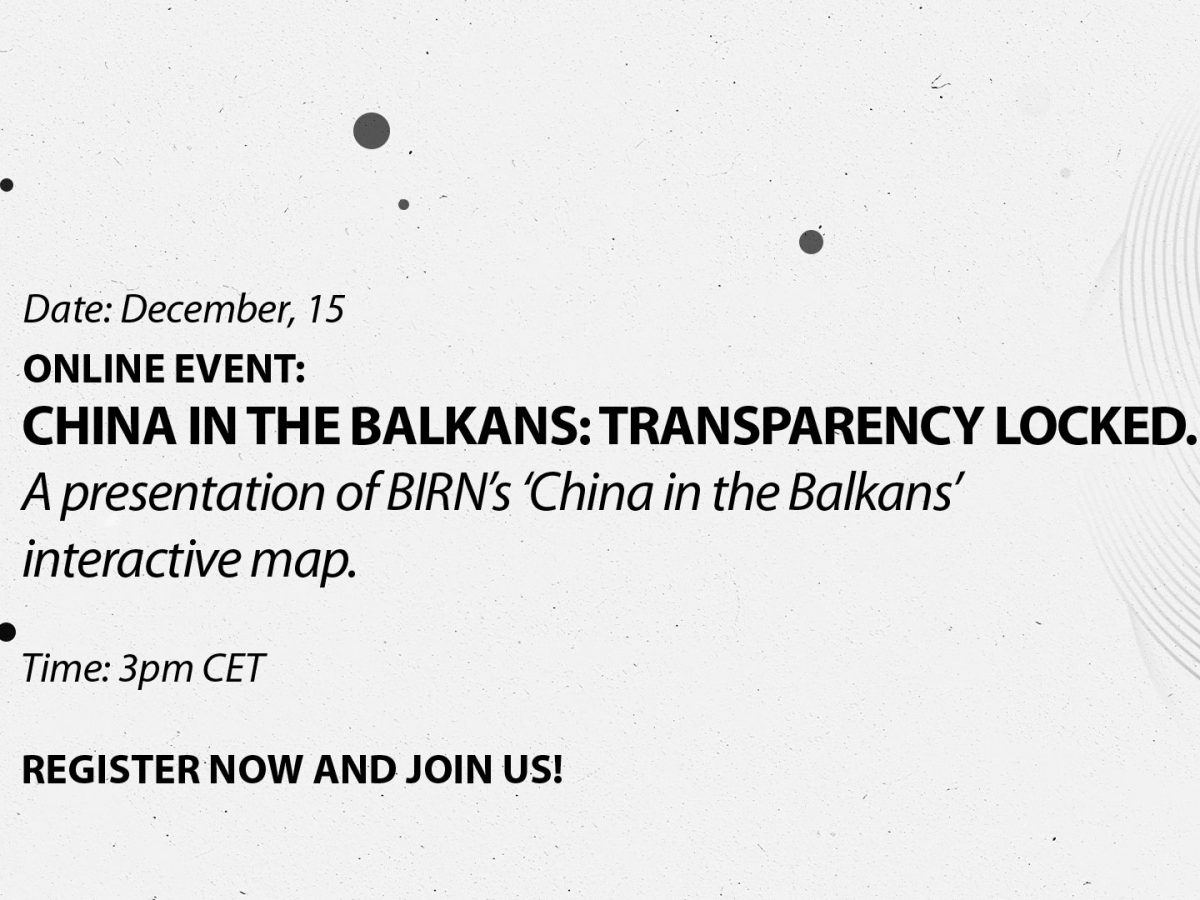 Together with our partners, BIRN is launching a series of online and offline events aimed to amplify the voices of strong and credible individuals and organisations in the region that promote the core values of democracy, such as civic engagement, independent institutions, transparency and rule of law.

As a primarily media organisation, we want to open space and provide a platform to discuss and reshape our alliances in light of the challenges facing democracies in South-East and Central Europe.

Due to the ongoing pandemic, Platform B event series will be organised in accordance with all relevant health measures. As the situation improves, we hope to be able to host some of the events in BIRN spaces in Sarajevo and Belgrade, and elsewhere in the region.

The Platform B will be an opportunity for individuals and groups to meet monthly on selected topics.

Next event: China in the Balkans – Transparency Locked

In the last decade, the entire SEE region has seen Chinese influence grow, mostly through the Belt and Road Initiative, BRI.  China is a relatively new player in the region, and it has raised some concerns related to the environment, political influence, corruption, and economics. While investments are growing, access to contracts and other data is often difficult, if not impossible to find.

In a bid to bring more information to these discussions and to shed light on the Chinese presence in the Western Balkans and Greece, BIRN is launching its interactive map ‘China in the Balkans.’ A result of BIRN’s research into the different cooperations between Beijing and countries in the region, the map tracks around 130 Chinese-linked projects, including foreign direct investments, but also those focused on infrastructure, culture, technology media and donations sent during the COVID-19 crisis.

Together with our journalists who worked on the project and regional and international experts, we will reflect on the findings of BIRN’s year-and-a-half-long research and discuss the implications of this Chinese presence in a broader geopolitical context.

Other panelists – regional and international experts – are to be announced in the coming days.

This online event is part of BIRN Open House – a series of events hosted by Balkan Investigative Reporting Network in Sarajevo that aim to foster debate about key thematic areas we usually follow through our journalism, but now we want to talk with you about media freedom, justice, accountability, memory, digital rights and many other things. The events will take place in the future Reporter’s House, space that will from next year host BIRN’s museum, dedicated to media and journalists, war in former Yugoslavia and challenges to contemporary journalism.

Upcoming events as of January:

Presentation of BIRN’s report into the position of female journalists in the Western Balkans newsrooms, early January.