Each month, BIRN introduces you to members of its team. For March, meet, Albulena Sadiku, Deputy Director and Senior Programme Manager at BIRN Kosovo. 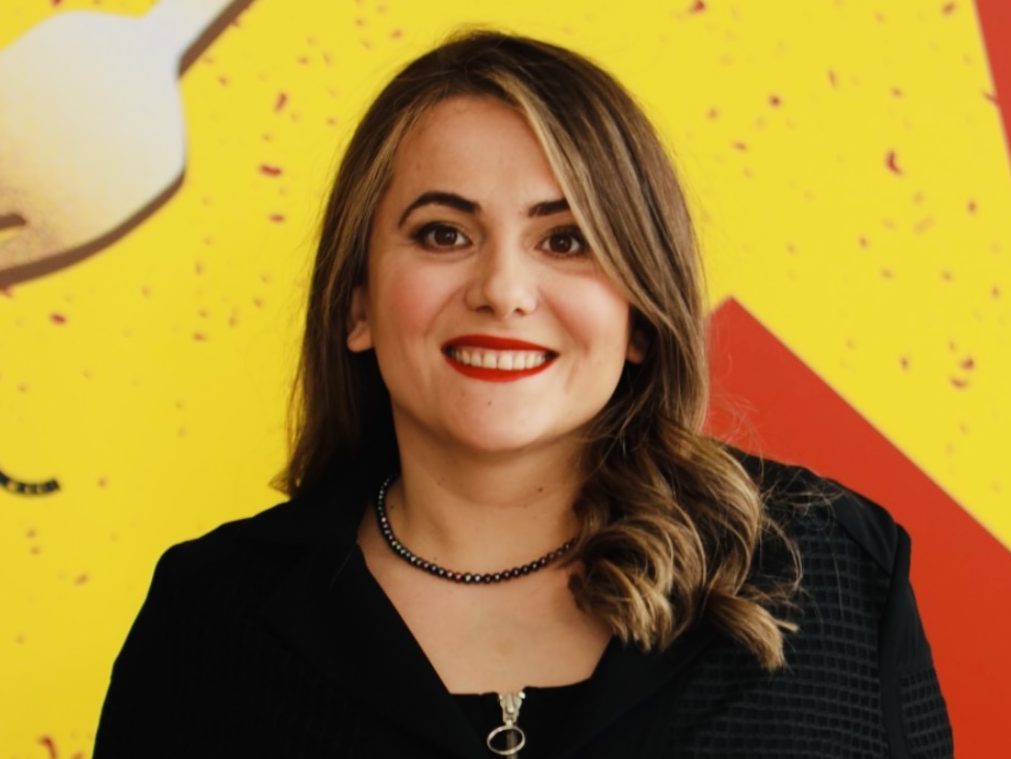 Sadiku, 33, is Deputy Director and Senior Programme Manager at BIRN Kosovo. This year, she celebrates her 12th work anniversary at BIRN. BIRN Kosovo is one of the most active partners of the network. Their “small” office has won numerous international prizes and distinctions while promoting democracy and accountability and the fight against corruption.

Sadiku has always been a civil society activist, she says. With her colleagues, they are working together, making a difference and most important, making a mark. Let’s meet her.

When I started working with BIRN, the organization was flourishing. People talked about the impact BIRN’s work was having in various spheres, including in the lives of regular Kosovo citizens. Naturally, as a civil society activist with some years of experience in civil society and advocacy, I saw BIRN as an ideal opportunity to maximize my activity and expand the platforms to do so.

This year marks my 12th anniversary since I started working for BIRN. In these 12 years, I have had the pleasure of seeing the organization grow exponentially. I, too, felt I could grow professionally with it and become part of a team whose work is significantly impactful. BIRN has acquired a great level of credibility among Kosovo institutions, prompting the latter to react to BIRN’s findings and act to improve their performance and the lives of regular citizens. The personal satisfaction gained through working with such a great team of people, and witnessing the fruits of our work on the ground, is unparalleled. I am beyond proud to be working with a team of highly professional journalists, who received eight journalism awards in 2021 alone. Our journalists’ work has received recognition from local and international institutions who have awarded them for their stories on public procurement, corruption and the environment.

BIRN Kosovo was established in 2005. Since then, the organization has grown hugely. It now houses a team of over 50 professionals of various backgrounds, including journalists, editors, legal advisers, court monitors, producers, technician operators, finance officers, project managers and coordinators, to name but a few. All these individuals have come together to fulfill BIRN’s mission of ensuring the momentum of democratic transition in Kosovo by promoting accountability, rule of law and political reform. BIRN’s flagship media products, including the online anti-corruption platform KALLXO.com, the television programme KallxoPernime and the fact-checking platform Krypometer/(Truth-o-Meter), enjoy great credibility among the Kosovo public, including public institutions. BIRN’s KALLXO.com was listed as the second most credible source for fighting corruption for over five years in a row, only finishing behind the Police and far ahead of the Prosecution and Anti-Corruption Agency. Furthermore, our team was recognized as a source for reporting corruption by the US State Department 2021 Investment Climate Statement, for the second year in a row.

The results of 16 years of BIRN’s work in advocacy, reporting and watchdog monitoring of public institutions have yielded great and meaningful impacts in Kosovo society.

A total of 1,705 citizens reported on our KALLXO.com anti-corruption platform in 2021 alone. Citizens’ reporting on the injustices they encountered led to the publication of investigations and television programmes that ultimately had an impact in improving the lives of regular citizens. During 2021, BIRN’s work resulted in more than 100 direct short-term and long-term impacts on wider society.

In 2021, BIRN Kosovo’s team of court monitors, legal officers and advisers monitored a total of 388 court hearings and submitted 2,099 legal complaints to relevant public institutions in Kosovo, of which around 970 were requests for access to official documents and requests for access to information. Our legal office also gained – and provided – expertise by participating in more than 45 public discussions, workshops, conferences and meetings.

BIRN’s impact in improving the lives of thousands of Kosovo citizens through its work in advocating, reporting and watchdog monitoring of public institutions, constitutes its biggest achievement. The wide impact of BIRN’s work would have not have been possible without the initial reports received from citizens through our online anti-corruption platform KALLXO.com.

Due to the type of work we do, our principal challenge is a lack of sustainable funding of our investigative reporting and watchdog monitoring. Furthermore, Kosovo still has weak accountability and reluctantly transparent institutions, and discrimination on the basis of gender, nationality, sex and networks persists. In these circumstances, our biggest practical challenge nowadays is lack of staff to deal with all the citizen reports that we receive. Lastly, we face continuous propaganda whenever our stories expose the powerful elites. This is also a consequence of Kosovo’s media scene being vulnerable to financial influences, as well as to those of other groups, which shrinks the space for independent reporting.

The enthusiasm of the people working at BIRN is what keeps the organization going, despite work-related difficulties. Each year we witness a dozen aspiring new journalists starting off their professional journey at BIRN as interns and then steadily growing and establishing their place in our team. It goes without saying that without our families’ support we would not have been able to get this far. This is especially the case for journalists, who are busy reporting from every corner of Kosovo and are often away from their families for long periods. Last but not least, none of the work we do would be possible without our donors, partners, sponsors as well as our supporters, friends and whistleblowers, who have continued to place their trust in us for 16 years.

BIRN Kosovo will continue to fulfill its mission and uphold the highest journalistic standards in Kosovo. We will keep the public informed through regular and specialized reporting while continuing to exert pressure to increase transparency and accountability in public institutions and advocate for changes to policies and legislation that will better represent citizens’ public interest. Lastly, and this is what I am particularly fond of and excited about, we will continue to deliver training to a wide array of stakeholders, including to local CSOs and media and journalism students, in investigative journalism and fact-checking; we will continue to support journalists through sub-grants, awards and fellowships programmes – and we will keep providing young journalists with  training and internship opportunities at BIRN.