A panel about threats, safety, legal protection, and other challenges facing female journalists in the Bosnia, organised by BIRN and OSCE Bosnia and Herzegovina, was held on Friday in Sarajevo, Bosnia. 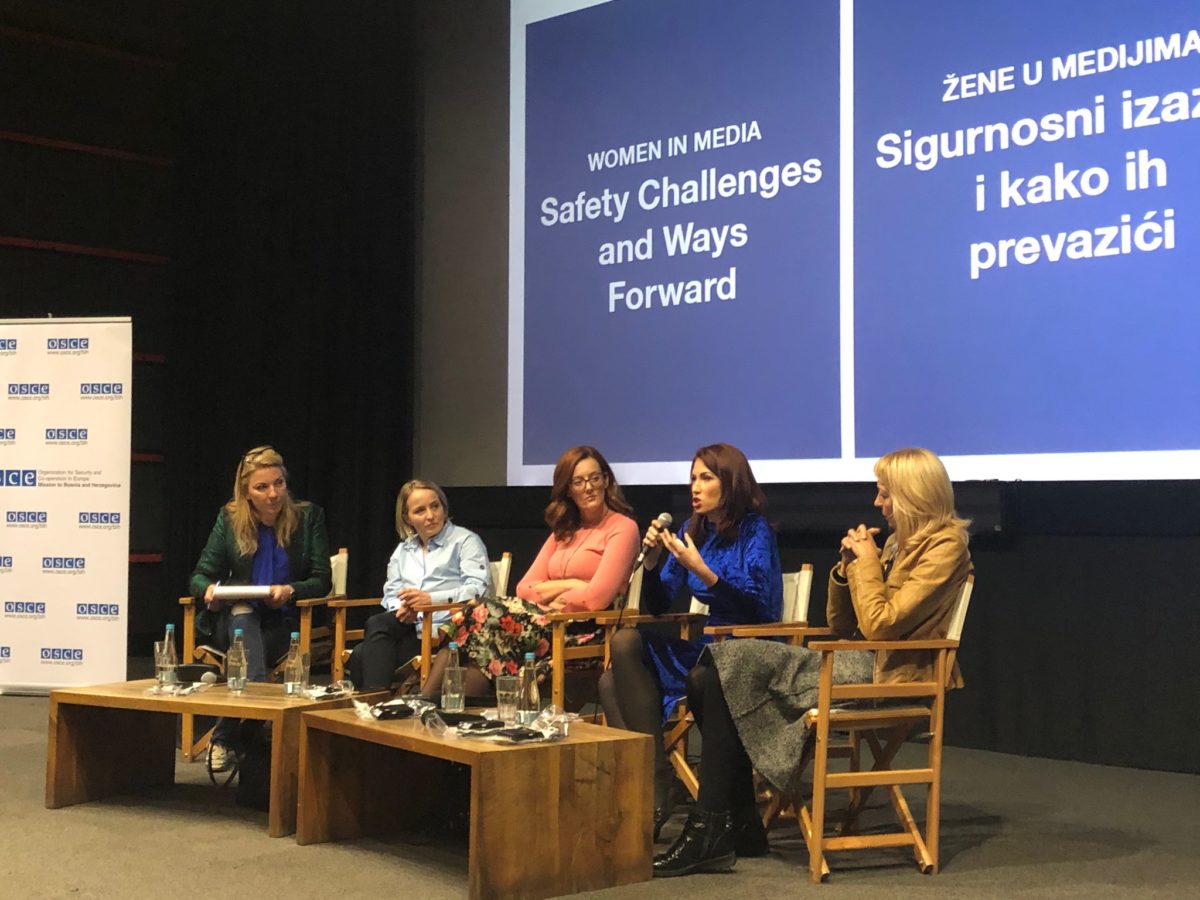 Panelists Marija Arnautovic, from Radio Free Europe, Martina Mlinarevic, a writer and freelance journalist, Dalija Hasanbegovic Konakonvic, from Al Jazeera Balkans, and Biljana Radulovic, an attorney, tackled some of the biggest problems facing women journalists in the country in their daily work.

At the opening of a panel, Hatidza Gusic, programme manager from BIRN, maintained that “female journalists in BiH are constantly exposed to gender-based violence, sexual harassment and constant discrimination just because they are women”.

“This violence is especially visible online,” Gusic added. “We need to do more for the perpetrators to be prosecuted for the violence they have committed, instead of them believing they are safe in hiding in their anonymity.”

Recent OSCE research has shown that female journalists in the country are attacked twice as often as their male counterparts.

“Unlike men, female journalists are confronted with different types of violence; they are threatened because they are women, and they are also exposed to sexual violence,” said Gusic.

The OSCE ambassador to Bosnia and Herzegovinam, Kathleen Kavalec, stressed that recent years had seen an increase in the incidence of hate speech, abusive comments and threats addressed to journalists through online communication around the world, including Bosnia.

“The OSCE Mission to BiH is strongly committed to supporting media freedom and protecting journalists – especially journalists,” she underlined.

“Journalists play a very important role in society because they provide information and create the preconditions for transparency, which is why they often face complex and dangerous situations in their efforts to inform citizens,” Kavalec noted.

“Those who have the courage to report pressing issues such as corruption, war crimes and transitional justice often do so at the expense of their own security,” she continued.

“This gathering is one of the steps we take to support all journalists, writers, authors and freelancers to publicize and counter the violence they face. We at the OSCE Mission to BiH will continue to be journalists’ allies in their fight for equality, security and journalistic freedom,” she concluded.

During the panel, moderated by Zinaida Jamakosmanovic, speakers concluded that in traditional societies like Bosnia, violence against women is often seen as acceptable, while the legal system is not doing enough to protect journalists in general.

“Lately, women journalists are being stigmatised and satanised,” Martina Mlinarevic told the panel, giving a grim example from her own personal experience.

“There were comments saying that people wished my breast to be cut off and for cancer to eat me alive. I found it so hard because the majority of those comments were written by women, with profile pictures of them standing in front of churches or with their families.”

One of the hottest topics in which female journalist are victims of online violence, threats and hate speech is the war-crimes stories they report on.

Stories reporting discrimination, attacks on human, women’s and LGBT+ rights also generate a lot of hate speech and create a risk for journalists, the panel heard.

Dalija Hasanbegovic Konakovic said female journalists need to speak up about what happens to them, and open up the discussion on violence “for our daughters’ sakes”.

“Those comments are present every time I do a story about war crimes, when I’m writing about Srebrenica, Prijedor, Tuzla, etc.,” she said. “I know I am going to be called the worst names. But when I talk to my male colleagues, they say they don’t get those messages.”

Biljana Radulovic agreed that female journalists should not stay silent. “They need to put up a good fight and ask the system to do its job,” she said.

“They should be more persistent with lawsuits for discrimination. Female journalists are also being put through economic violence through lawsuit for slander,” she noted.