From July 25-29, 2022, BIRN Kosovo held its first Anti-Disinformation Summer School in Prishtina, hosting 19 students and young journalists from different communities all over Kosovo. 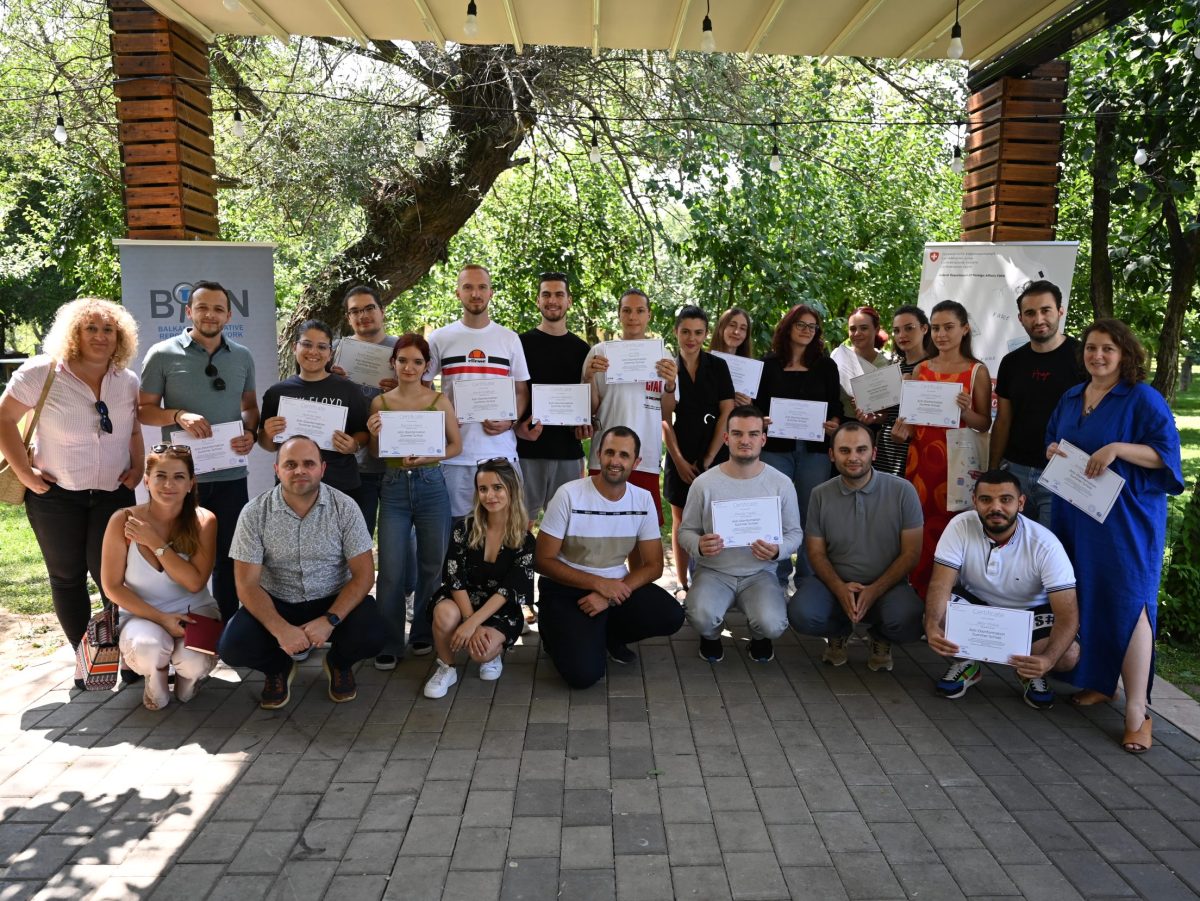 BIRN Kosovo’s first Anti-Disinformation Summer School, held between July 25 and 29 at Amazona Hotel in Prishtina, brought together a diverse group of students and young journalists from all corners of Kosovo, to train them in identifying and debunking fake news and disinformation and develop their skills in fact-checking journalism.

The sessions consisted of various activities, including training modules delivered by renowned local journalists and editors, discussion sessions with distinguished guest speakers in the field of journalism and beyond, Q&A sessions with representatives from public institutions in Kosovo and field trips to cultural sites in and around Prishtina.

On the first day, BIRN Kosovo welcomed the Ambassador of Switzerland in Kosovo, Thomas Kolly, who, together with BIRN’s Executive Director, Jeta Xharra, gave opening statements at the kickoff of the Anti-Disinformation Summer School. Participants were then introduced to the history of fake news and disinformation by Kreshnik Gashi, managing editor of BIRN Kosovo’s KALLXO.com platform, followed by the first training module, delivered by Gashi on the basic principles of journalism and investigative reporting.

The first day ended with a field visit to the Archives of the Republic of Kosovo in Prishtina, where participants met Bedri Zybera, the Executive Chief Officer, who briefed them on the role of this institution in the preservation of archival material, its systematization and handling, and the process of making it available for all interested parties, including journalists. Participants then visited the storehouse where the all the archival material owned by this institution is kept.

Some of the highlights of day two included: a Q&A session with Bekim Kupina, Adviser to the President of Kosovo, who discussed the mechanisms used by this institution to debunk fake news and disinformation directed at the President of Kosovo and the Presidency; a training module on international fact-checking mechanisms and fact-checking economics, politics, security and current affairs issues, delivered by Visar Prebreza, editor at KALLXO.com; and the field visit to the Documentation Center Kosovo, where participants viewed the exhibition “Once Upon A Time And Never Again”, in memory of the 1,133 children killed in the war in Kosovo 1998-2000.

Among other things, Zylbeari talked about the role of PORTALB as the only fact-checking platform in North Macedonia. Ristic spoke on the regional context of disinformation and fake news as well as the role of BIRN in strengthening the resilience of the media against fake news and malign influences.

As part of the Q&A session on “Disinformation from an Institutional Point of View”, participants spoke to Flora Ahmeti-Haziri, from the Information Office of the Kosovo Police, on key public communication challenges faced by this institution and ways to overcome them. Part of the third day’s activities was also a training module on media ethics and the legal consequences of defamation and libel, delivered by Labinot Leposhtica, head of the Legal Office at BIRN Kosovo.

This was followed by an interactive group activity in which participants had to identify violations of the Code of Ethics in two articles given to them. Day three of the Summer School ended with a visit to the studio of RTV Dukagjini, where participants witnessed first-hand the process of news production and broadcasting.

One day four, participants welcomed guest speaker Imer Mushkolaj, Executive Director at the Press Council of Kosovo, PCK, who discussed the importance of regulatory and self-regulatory bodies such as the PCK in fighting fake news and disinformation. Participants were later joined by Ersan Qavolli, Prosecutor at the Basic Prosecution in Peja, who spoke about the mechanisms used by this institution to communicate with the public as well as the cooperation (or lack of it) between local media and the Prosecution.

Participants then gained hands-on skills in conducting citizen-based reporting and investigating stories on human rights and corruption, followed by a training module on producing and editing videos and identifying deep-fake content, delivered by Internews Kosova’s Producer, Valdet Salihu. Day four ended with a cultural visit to the Grand Hotel, where participants saw artworks exhibited in this hotel as part of the Manifesta 14 Biennal festival currently taking place in Prishtina.

Executive Director of KoSSev Tatjana Lazarevic joined participants on the last day of the Anti-Disinformation Summer School, to talk to them about propaganda and fake news in the context of the Serbian community in Kosovo as well as about the role of KoSSev in providing objective and trustworthy information to the community.

A total of 19 participants attended, of whom 11 were women. One participant joined the Summer School virtually via Zoom, while the remaining 18 followed in person at Amazona Hotel. Of the 19 participants, five were from minority communities in Kosovo, including three from the Bosniak community, one from the Roma community and one from the Turkish community.

The Anti-Disinformation Summer School was organized in the framework of the project “Contribute to increasing transparency and accountability of the Kosovo government and raise citizens’ awareness on disinformation”, funded by the Swiss embassy in Kosovo.