Haris Rovcanin has won second prize in the 2021 Fetisov Journalism Awards in the ‘Outstanding Contribution to Peace’ category. 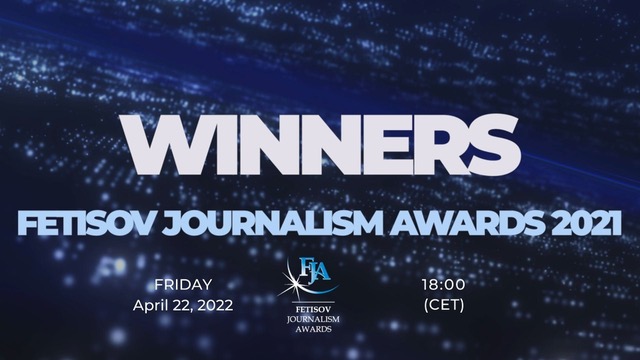 Haris Rovcanin, a journalist with BIRN Bosnia and Herzegovina, won second prize in the Fetisov Journalism Awards for a four-piece series of articles – two of which he co-authored together with Albina Sorguc, who was a member of BIRN team at the time of their publication.

During the awards ceremony, which was held online, it was announced that the winners had been chosen in troubled times, when the struggle continues around the world to combat injustice and strive for peace and reconciliation.

The winners were announced by Aidan White, honorary advisor to the Fetisov journalism awards and president of the Ethical Journalism Network, in a video posted on social networks.

“These winning stories demonstrate why truth-telling journalism is important to all of us. We congratulate them. They have done good work and they’ve made difference to people’s lives,” White said.

Rovcanin said the award means a lot to him as an incentive for his future work.

“The award for international contribution to peace certainly means a lot to me, especially as a great incentive for my career and continuation of successful work,” Rovcanin said, adding that BIRN has been awarded for its high-quality and dedicated work.

Other winners in the same category include Syrian-Swedish duo Ali Al Ibrahim and Khalifa Al Khuder, for their story, “Syria’s Sinister Yet Lucrative Trade in Dead Bodies” and Olatunji Ololade from Nigeria, for “The Boys Who Swapped Football for Bullets”.

The Fetisov awards, founded by Russian businessman and philanthropist Gleb Fetisov, promote universal human values such as honour, justice, courage and nobility through the example of outstanding journalists from all over the world, for “their service and commitment contribute to changing the world for the better”.

The “Outstanding Contribution to Peace” category recognises articles on anti-war topics that have made an important contribution to peace-making and to spreading the concept of human life as the highest value.

The three other categories are “Contribution to Civil Rights”, “Outstanding Investigative Reporting” and “Excellence in Environmental Journalism”.

This year, just under 400 entries from 80 countries around the globe were submitted and 13 winners were selected in the four categories.

This year’s jury consisted of Ann Cooper and Bruce Shapiro from the US, Barbara Trifonfi from Austria, Christophe Deloire from France, Christopher Warren and Julianne Schultz from Australia, Eva Markaceva from Russia, Kaarle Nordenstreng from Finland, Mariana Santos from Portugal/Brazil, Nikos Panagiotou from Greece and Ricardo Gutierrez from Belgium.

Former BIRN Bosnia journalist Sorguc was also shortlisted alongside Emina Dizdarevic for the Fetisov Award in 2019 in the “Outstanding Contribution to Peace” category for a series of articles on war crimes and transitional justice.