On May 8th, 2017, BIRN and Internews Kosova marked a decade of monitoring Kosovo’s judicial system with the launch of the 2016 Court Monitoring Report. This project has been implemented for ten years now, and each year it has provided an overview of the situation in Kosovo’s justice system and has offered recommendations on how to increase transparency and accountability at all levels of the system. 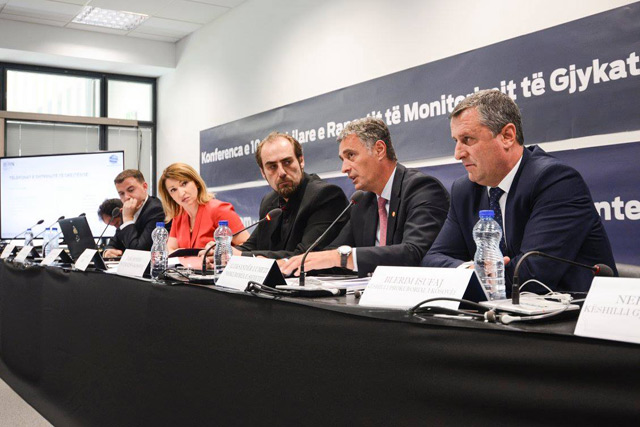 The author of the report, Petrit Kryeziu, summarized the report’s main findings, including delays on filing criminal charges from the police and the prosecution, failures to justify decisions on pre-detention, and flaws in the strategy for detaining suspects awaiting trial. One of the report’s general recommendations is that Kosovo courts need to work harder on improving the way they treat pre-detention cases. Another recommendation is that the Ministry of Justice needs to consider strengthening the option for alternative sentences, such as referring appropriate cases to mediation.

The report also revealed concrete examples of procedural violations in the judicial system during 2016. These violations included cases in which the defendant’s right to be informed in the native language was denied, unnecessary postponements of court hearings, and lack of court order during trials.

Internews Kosova’s Executive Director Faik Ispahiu expressed gratitude to the entire team who contributed to the making of this project and emphasized that there have been over 50 monitors who worked on this project, some of which are now prosecutors, judges and lawyers. BIRN Kosovo’s Director Jeta Xharra added that despite the fact that the findings indicate room for courts to increase transparency, the ten-year collaboration shows that there is no rivalry between monitors and employees within the justice system.

Kosovo’s Chief Prosecutor Aleksandër Lumezi stated that he appreciates the findings and recommendations of the report and expressed his readiness to cooperate with the media. He emphasized that the flaws in the system will be improved upon and organized crime and corruption will be properly fought only through cooperation.