There are eight candidates running for the mayor of Dragash. Among them are those charged with the misuse of their official position and  tax evasion. 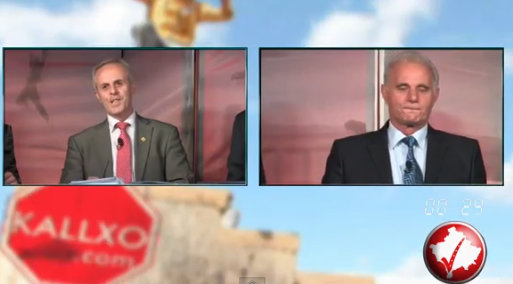 The candidates accused the current mayor of Dragash of corruption, misuse of official position and bad management of the municipality. Meanwhile, the current mayor and PDK’s mayoral candidate, Salim Januzaj, tried to fight these accusations.

All but one candidate for mayor took part in the debate. Safet Kushi from the Bosnian Initiative CDU did not participate.

Other candidates were: Bledi Kurtishi from VETVENDOSJE, Fatmir Mehmeti from LDK, Nexhat Isufi from Democratic Union, Nuhi Tairovci from VAKAT, Salim Jonuzi from PDK, Selami Sait from AAK and Nevxhet Tahiri from the National Front.

In the first two minutes, candidates unveiled their municipality programs, in which all promised to improve issues with the supply of running water, infrastructure, state of education and tourism development, but failed to explain the financing of these promises.

The disagreements were mainly among LDK, National Front, Democratic Union and the PDK candidates, while Nuhia Tairovci from VAKAT was more or less silent.

A business center full of garbage

Salim Januzaj, from PDK, praised himself for building the business center in Dragash, but remained speechless when the host of the program reminded him that the center was filled with garbage. He failed to provide an answer when asked about the removal of the garbage.

Fatmir Mehmeti of LDK, said Salim Januzaj has in fact created another illegal landfill by building the business center; there is a total of 20 illegal landfills in Dragash.

The National Front candidate admitted his wrongdoing when admitting to not paying his parking tax since. His reasoning behind this is the continuous disagreement with the town’s municipal current government. Xhevxhet Tahiri has been failing to pay parking tax for ten years now.

Salim Jonuzi was once again humiliated when asked whether his morals allow him to run for another mayoral mandate knowing he has been charged with the abuse of power.

Jonuzi declared not guilty to the charges.

Furthermore, the National Front candidate admitted he doesn’t pay the property tax either, hence failed to explain how he would collect the huge property tax debts of Dragash citizens.

Tahiri promised to pay his debt if elected mayor.

Selami Saiti from AAK stated he aided fellow citizens to bypass queues in the Prizreni hospital.
He works at the Radiology Department of the Daut Mustafa Hospital in Prizren.

The debate touched upon other issues, such as violence in schools of Dragash and low participation of women in education and employment. All candidates promised to work these issues.