Drenas mayoral candidates promised access to running water to a large number of residents, as only 10 percent of its citizens have access to the network. The current mayor of the Drenas municipality, Nexhat Demaku is running against Izet Abdyli from LDK, Rifat Demaku from Vetevendosje and Shaban Hasi from AAK. The candidates attacked one another during the debate. 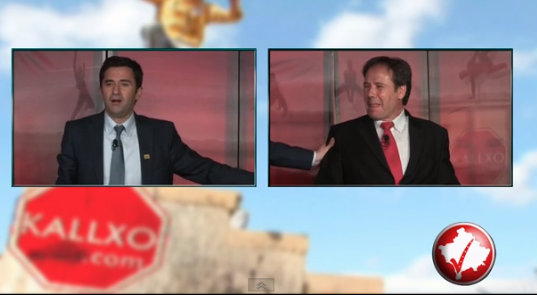 The question was simple: What message would you like to give to people who have manipulated votes in previous elections?

He said, “All manipulated votes not only the PDK”.

Former U.S. Ambassador to Kosovo, Christopher Dell, said during the 2010 local elections  that  “industrial theft of votes” took place, while most of the irregularities were reported in Drenas and Skenderaj.

Tough questions were addressed to other candidates by citizens, BIRN and GAP researchers.

Shaban Hasi, AAK’s candidate, was asked why he was arrested in Switzerland in 2008 for misuse of disability pension –  to which he responded by saying that he was a suspect but everything got cleared up.

Rifat Demaku from Vetevendosje  was asked why he doesn’t carry the Albanian flag on his suit like the rest of the members of his party –  to which he responded by saying “I carry the flag in my heart.”

Izzet Ibrahim from the Civic Initiative for Drenas was asked about a shopping mall he built during his time as Mayor of Drenas in 2000-2002, which is considered a failed project.

Ibrahim said the mall only needs to be put into operation.

People were interested to hear more regarding the water supply, as only 10 percent of Drenas residents have access to the public water network.

Candidates promised that they will solve this problem during the next four years if elected.

The debate continued with arguments on various issues.

Residents mentioned rock quarries that threaten their lives, while the c Demaku said he will continue to improve sanitation and water supply network.

All but the LDK’s candidate agreed for their families to be interviewed.