“Life in the Municipality” team went on 30 August 2012 to Gjakova municipality in order to organize a debate with mayor if thus municipality as well as with citizens and representatives if civil society. Both sides – the mayor on the one hand and the opposition parties and citizens clashed their arguments regarding fulfilment of the promises made by mayor Pal Lekaj at the end of 2009. 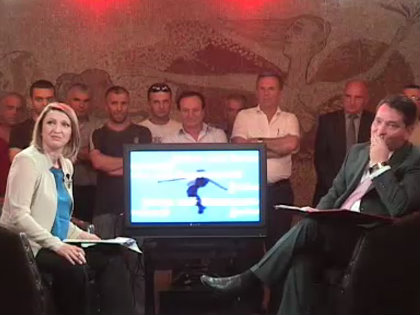 Those promises were mostly related to sustainable local economic development, revitalization of old part of the city, support for small and medium enterprises, and development of education, health and agriculture as well as improvement of water supply and heating for Gjakova citizens.

Monitors of the Gap Institute and BIRN went to there in order to monitor to what extent mayor has fulfilled the abovementioned promises.

The monitors found that, the work to revitalization of the old part of the city has not started yet. Among others they have revealed that the construction of two riverbeds within municipality have not started yet too.

On the other hand, according to the inhabitants of Osek village, the mayor Lekaj has promised the construction of roads, street lighting, and contraction of water supply as well as construction of the village school but he didn’t fulfilled these promises at all.

Besides the critics addressed to the mayor, the debate offered Mr. Lekaj the opportunity to present the projects conducted successfully. He presented a series implemented projects – which have improved the lives and welfare of Gjakova’s citizens.

The moderator has opened the debate with the audience, who asked challenging questions for mayor Leka and also raised the discussion of many crucial issues for their lives.

At the end of the debate, a 16-year-old Arlind Basha considered to be the “Pride of the Municipality” was presented to audience. Basha has managed to reach the record of making goals and has been recruited by a very famous football Croatian team – Hajduk Split.