Kallxo.com launches a new tool to rate the truthfulness of public statements made by high public officials. We called it Krypometer. Here’s why. 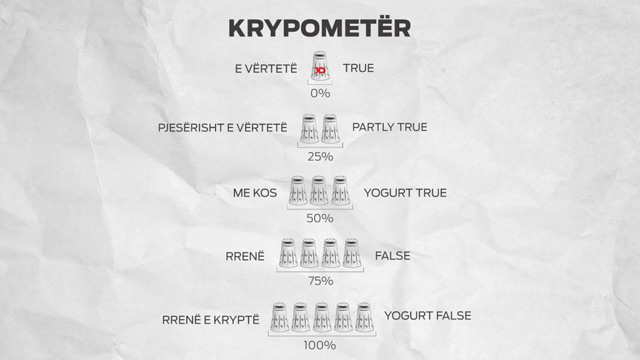 Either deliberately or due to ignorance, for the past 17 years multiple presidents, prime ministers, ministers, and politicians have issued false statements in order to achieve their goals or propagate uncertainty. These statements have been discussed and debated in various circles, but less so in the media.

Until now, this social debate has proceeded without a real measuring tool to clarify the truth for citizens.

In the past 17 years, there has been no systematic verification of the truthfulness of statements made by individuals who held public office.

Due to the uncertainty, obscurity, and lack of accountability for public statements, KALLXO.com and Life in Kosovo are launching the first tool that will rate truthfulness–in other words, a fact checker.

We decided to call our truth-o-meter KRYPOMETËR, which would translate from Albanian as Salt-o-meter.

“Na krypi tu na rrejt (He salted us!)” is an Albanian idiom used to refer to liars. More specifically, it alludes to a situation in which the level of salt in a dish becomes the measurement of how tolerable the dish is. Various international media have called such tools differently. We have chosen to measure the level of falseness, or truthfulness in statements made by public officials with saltshakers. We will use salt as a popular synonym to the lie.

The purpose of the Krypometer is to reflect on the truthfulness of a public statements, to scan and inspect the statement of a political figure regarding issues of great local, central, or international importance.

We will select written and broadcasted speeches, news articles, interviews, press statements, campaign brochures, advertisements, and Facebook posts. Since we cannot select every assertion, we will focus on the ones that are current and important. We will not work only during election campaigns, but at all times. As we have witnessed in the past, it is quite normal for many untruths, especially about the future, to be told during election campaigns.

Nevertheless, the choice of statements will not be only ours. Citizens including experts, intellectuals, and scientists who are listening to statements, can suggest specific statements to be considered for the Krypometer.

We aim to create an active citizenry and intellectual class by providing citizens with a platform where they can contradict public statements with facts.

The statements will be measured by criteria that will be public, and for which we are happy to receive comments, critiques, and suggestions. There are five levels in the truth-o-meter, all denoted by salt.

We also have foreseen a category which in Albanian we called “me kos” (with sour milk) to denote those statements that have serious lapses and/or exaggerations. This category includes statements that might have factual inaccuracies, but not at all costs. A politician can create a false impression by playing with words or using a discourse that means nothing to common people. This will be classified as “half true.”

When a statement is not true, then we will use four salt shakers. A statement is categorized as such because it is an untruth and has factual inaccuracies. Such statements can include data that are technically correct (like: statistical data), but that are used out of context and end up being misleading.

The fifth category, which we have called ‘pants on fire’ in English, refers to outright lies. This category includes statements that are complete lies – not only are they not true, but they are also ridiculous/unheard of and absurd in their implications. We will use “investigations continue” in cases when we cannot check the statement quickly or when we are dealing with complex cases in which there are good points for both sides of the argument. We will stop our assessment to gather more facts. We will use this forum to illuminate controversial statements that are not easily solved.

All assessments are open for discussion and criticism from our readership and all stakeholders. At the same time, all assessments can be updated once new facts come to light.

To a large extent, the success of this project also depends on you – our readers and viewers. We shall rely on the public to suggest statements made by politicians, interest groups, and the media so that we can inspect them and see whether they are based on facts. We welcome any comments and suggestions, which can be submitted by using the @krypometer on Facebook and Twitter. The final goal of this project is not to tell someone that they are lying, but to lower the level of deception and manipulation from people who hold power.

KALLXO.com and Jeta ne Kosove are part of the International Fact-Checking Network, IFCN, by the Poynter Institute. In addition to being part of an international network of fact-checkers, we also subscribe to the Ethical Principles that need to be applied when facts are checked. An impartial and transparent verification of facts can become a powerful instrument for accountable journalism.