Serbeze Haxhiaj was awarded first prize for the 2016 Balkan Fellowship for Journalistic Excellence programme at a closing ceremony in Pristina on Friday. 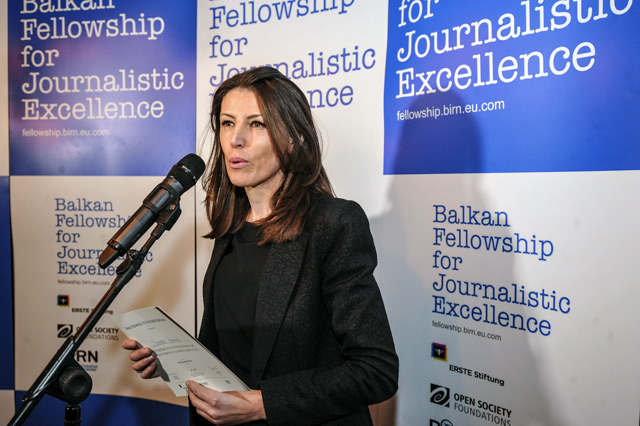 Serbeze won the prize of 4,000 euros for her story about the challenge facing a new court in protecting witnesses to crimes allegedly committed by former guerrilla fighters often regarded as heroes in Kosovo.

The second prize of 3,000 euros went to Masenjka Bacic for her article about the threat to abortion rights in Croatia.

The third prize and 1,000 euros was awarded to Elvis Nabolli for his story about the resilience of the cannabis industry in Albania.

“Serbeze Haxhiaj has written a powerful and brave story about a controversial topic that Kosovar society has been reluctant to address”, said jury member Kristof Bander.

The book “Trust: Misplaced. Betrayed. Restored” brings together their work and was presented at the award ceremony in front of 150 guests including media partners from Europe, prominent public figures and more than 50 members of the Fellowship’s alumni network from across the region.

With the conclusion of this year’s programme, the 10 fellows join the BFJE alumni network, which already consists of more than 80 journalists from 10 Balkan countries who collaborate on stories and promote the highest professional standards.

The Balkan Fellowship for Journalistic Excellence was launched in 2007 to promote high-quality, cross-border reporting. The programme provides fellows with financial and editorial support, enabling them to travel, report and write their stories and develop their journalistic skills.

The fellowship will issue a call for applications for next year’s programme in January 2017.