Kosovar journalist Jeta Xharra is a spy for Belgrade, if one is to believe a campaign waged by pro-government press over the past week targeting the “Life in Kosovo” program, which she hosts on public television and which dares to address controversial and even taboo topics. 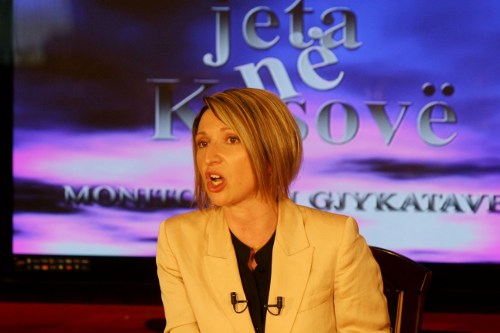 Xharra is the director of BIRN Kosovo, which produces “Life in Kosovo,” aired weekly on public broadcaster RTK. Screaming front-page headlines on the Infopress tabloid newspaper reached a climax in recent days, stating “Jeta Xharra is an Agent of the Serbian Secret Police,” and calling for the programme to be taken off the air.

“This is an explosive allegation in a society still traumatized by Serbian oppression and wartime atrocities, and is a clear incitement to acts of violence against our Kosovo staff,” said Xharra.

On Thursday, Infopress appeared to issue a death threat against Xharra, commenting: “Jeta has brought it upon herself to have a short life.”

The situation intensified following the 28 May edition of the program, dedicated to freedom of the media in Kosovo. It discussed how government advertising is used to influence the media landscape and recent dismissals of journalists who inconvenienced the authorities.

It featured a video report in which the BIRN Kosovo news team was expelled from the Office for Public Information of the municipality of Skenderaj in the central Kosovo Drenica region, and forced to leave town by an armed man who confiscated their footage.

Infopress newspaper, which receives the lion’s share of government advertising revenues, has led the campaign with a series of inflammatory articles on Xharra and the program, claiming they had set out to denigrate the Drenica region. Threatening emails followed, including death threats, and the newspaper itself published openly abusive and threatening letters from readers.

Xharra said: “We have nothing against Drenica. These are vicious and manipulative smears. On the contrary, our show has on several occasions dealt with the negligence of officials, which contributes to Drenica’s/Skenderaj continuous poverty”

Given Infopress’ closeness to the government, she added: “I would like to see the government explicitly distance itself from these disgraceful attacks. We need to be reassured that this is neither part of a wider campaign to put the public broadcaster under state control nor to silence an incisive and impartial source of information ahead of local elections scheduled for this autumn.”

“Life in Kosovo” is a very popular show, despite the death threats, spy allegations and negative press. It touches on taboo topics ranging from homosexuality to corruption of public officials and is Kosovo’s most-watched current affairs program.