The court in Pristina held a closed session in the case against a municipality chief and a group of newspaper staff over a slur campaign against BIRN Kosovo director Jeta Xharra. 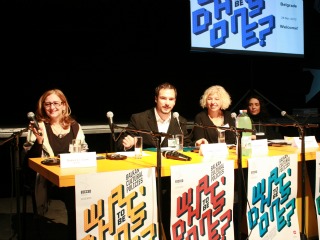 A protected witness testified on Tuesday in the case against the head of the Skenderaj/Srbica municipality, Sami Lushtaku, and a group of five journalists and executives from the now-defunct Infopress newspaper, who are all accused of staging a negative media campaign against Xharra.

The hearing was held behind closed doors because the witness is protected by the EU rule of law mission in Kosovo, EULEX, due to their involvement in another case. The testimony was presented to the court via video link.

Lushtaku is charged, along with Infopress’s former owner Rexhep Hoti, former executive director Arizona Dibra, former editor-in-chief Avni Azemi and former journalists Rizah Hajdari and Qani Mehmeti with making threats against Xharra and violating her citizen’s right to equality in May and June of 2009.

According to the indictment, the campaign was launched after Radio Television Kosovo broadcast an edition of BIRN’s TV programme, ‘Jeta ne Kosove’ (‘Life in Kosovo’) dealing with alleged mismanagement and unfavourable conditions in Skenderaj/Srbica where Sami Lushtaku was acting chief at the time.

Over the course of 12 articles published by Infopress, Xharra was called a “Serbian spy”, a “professional bomb” and subjected to other insults, the indictment says.

The trial started earlier this month and the next hearing is scheduled for April 15.