The Balkan Investigative Reporting Network (BIRN Serbia) launched a portal called Javno.rs, an open and fully searchable database containing thousands of documents on public expenditure, on March 28. The link for the site is http://javno.skockajtebudzet.rs/index.php. 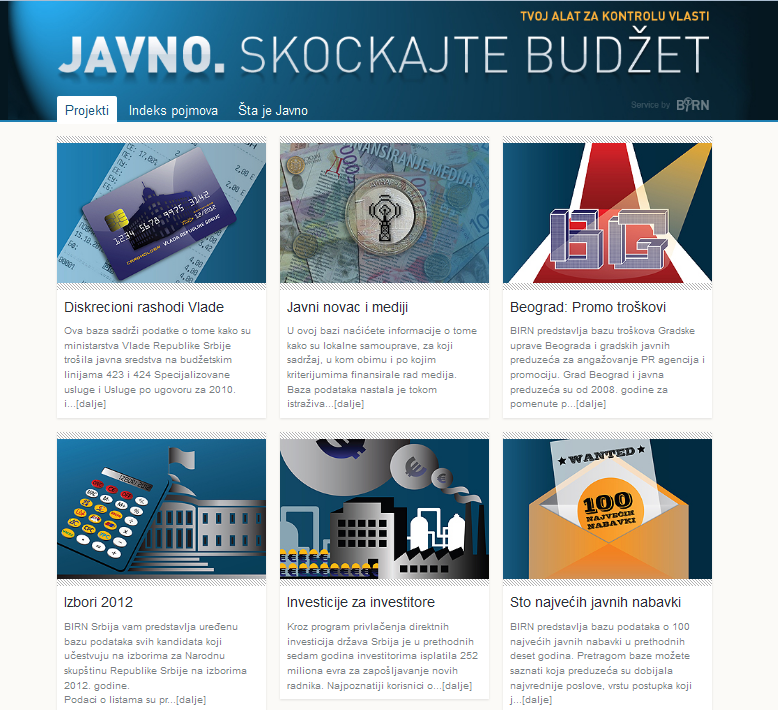 The database that the BIRN team has been compiling since 2010 is primarily meant for journalists and researchers as well as for all interested citizens. The aim of the Javno.rs  website is to make information about the spending of public funds easily accessible to the wider public.

Javno is devised as a constantly growing resource that is regularly updated. The databases that have been created will be supplemented every year while new ones will be developed, covering fields of interest that we assess as murky areas of public expenditure or as potential generators of corruption in Serbia.

1. Discretionary expenditures of the Serbian government, containing information on how the ministries spent public funds on budget lines 423 and 424 Specialised services and Contracted services for 2010 and 2011.

2. Public funds and the media, containing information on how local government bodies financed the media, what particular content they financed, what was the scope of this financing and what criteria were applied during the process.

3. Belgrade promotional costs, a database of the expenditures of the City of Belgrade Administration and city public companies on hiring PR agencies and on promotion.

4. One hundred biggest public procurements, a database of the 100 biggest procurements in the past ten years.

5. Investments for investors, a database on the programme for attracting direct investments to the Serbian state and the employment of new workers over the past seven years

6. 2012 elections, a database of all candidates who participated in the Serbian parliamentary elections in 2012.

The idea for Javno came from BIRN but our many partners helped to implement it: from the British Embassy in Belgrade to IREX.