In an unprecedented public debate organized by Internews Kosova and BIRN, Edita Tahiri, Kosovo’s Chief Negotiator, and Serbia’s former Chief Negotiator, Borislav Stefanovic, have discussed the agreements they have reached during the EU moderated negotiations. 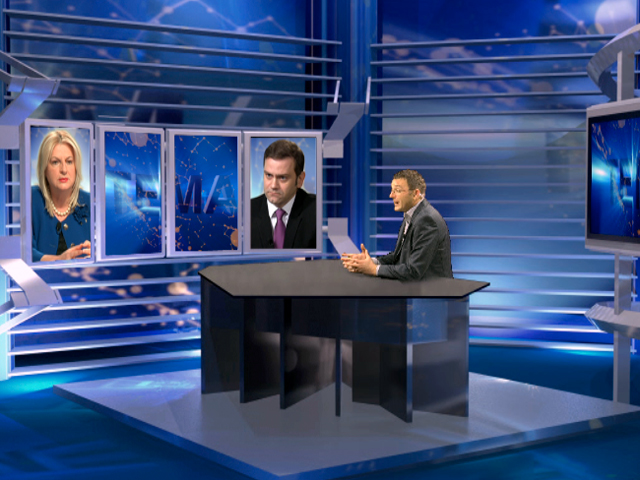 In their first public debate without the mediation of Robert Cooper, EU’s chief negotiator, Tahiri and Sefanovic recalled the most difficult moments of the 18-month long Brussels negotiations.

In the first ever edition of the series of regional TV debates called ‘Tema’(Topic), Tahiri and Stefanovic spoke about the challenges of reaching agreements in seven areas and elaborated on the problems encountered in implementing those agreements in the field.

The debate will be aired by privately owned national broadcasters, on Monday, December 3, at 10.30 pm on TV21 in Kosovo and on Thursday, December 6, at 9 pm on B92 INFO.

Since March 2011, the EU has been facilitating technical negotiations between Kosovo and Serbia, aimed at normalizing the relationship of Belgrade and Pristina.

So far, the two sides have reached deals on trade, mutual recognition of university diplomas, representation of Kosovo at regional meetings, freedom of movement including the Integrated Border Management, IBM.

The two negotiators engaged in polemics over what was exactly agreed especially on the issue of the ‘Integrated Border Management’ agreement reached by the two sides on December 2, 2011.

The former Chief Negotiator Borko Stefanovic, insists that Belgrade was provided with guarantees that some of the agreements reached are not applicable to the Serb-run north of Kosovo.

“We agreed that EULEX [EU Rule of Law Mission to Kosovo] has the executive role at the Jarinje and Brnjak border crossings,” Stefanovic said insisting that if this is not the case in the north, then “there will be no agreement,” as far as Serbia is concerned.

On the other hand, Kosovo’s former Chief Negotiator, Edita Tahiri, told Stefanovic that he misinformed his own parliament after the technical protocol was agreed upon.

This episode is the first in a series of several Kosovo-Serbia debates will be aired in both places.

The aim of the debates is to break the communication barriers between Belgrade and Pristina and demystifies the process of negotiations.