KALLXO.com presented findings of a monitoring report from the second round of the 2014 National Matura Exam, held on June 28 in Kosovo. 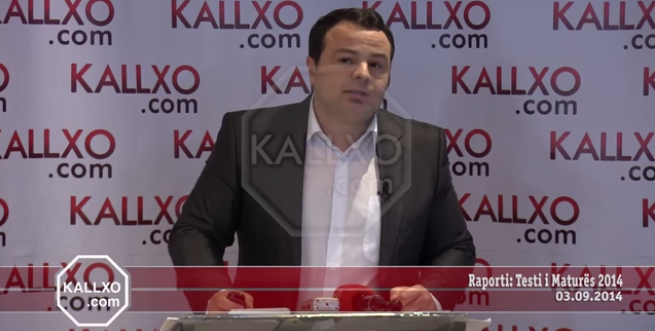 Muhamet Hajrullahu, coordinator of the monitoring process for KALLXO.com, said monitoring teams were sent to 36 centres in 21 municipalities.

“The crew from KALLXO.com revealed various gaps of the process in the centers that were monitored even though security guards were used that day to administrate the process,” Hajrullahu said.

Hajrullahu said there were also problems with the identification of pupils. Discussing concrete findings, Hajrullahu mentioned a case in Podujeve, where the most serious violations happened.

“After the reporting from KALLXO.com on the Podujeva case, the police together with the Ministry of Education, Science and Technology reacted and people who shared copies of the exam through social networks were identified,” he said.

The reporting of KALLXO.com prevented further cheating from takng place.

Hajrullahu said that based on the experience from the monitoring in June, KALLXO.com recommends that the Ministry of Education, Science and Technology take into consideration the following:

1. Written tests should be encouraged as means to assess knowledge throughout the school year.
2. Administration of the testing process should be entirely conducted by teachers.
3. Protocols and responsibilities of officials engaged in test administration processes should be disseminated in clear written form, in a timely manner.
4. Responsibility to participate in and administer the testing process could be regulated contractually with all teachers.

The monitoring teams of KALLXO.com will be in the field on September 6 for the second round of the National Matura Exam.