BIRN Justice Report’s editor-in-chief Erna Mackic was one of the speakers at a one-day seminar on April 6 in Teslic organised by the Press Council of Bosnia and Herzegovina, which brought together representatives of the Bosnian judiciary, police and media. 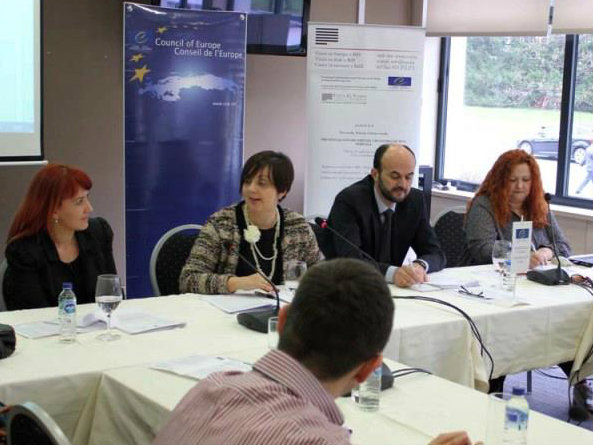 Mackic spoke on a panel called ‘The Judiciary and the Media Acting in the Public Interest’ about the transparency of the BiH court and the extent to which the Law on personal data protection is applied to official court documents.

“The current practice of protecting data from court proceedings, to the extent of complete anonymisation, hampers professional courtroom reporting. This is especially problematic when war crimes cases are in question. The anonymisation practice does not only influence accuracy, but also contributes to speculative media reporting,” emphasised Mackic.

The panel was moderated by Ljiljana Zurovac, executive director of the Press Council. Other speakers included Borka Rudic, secretary general of the Association of BiH Journalists, and Petar Kovacevic, director of the Personal Data Protection Agency.

Kovacevic said that judges and prosecutors across the country have expressed their readiness to cooperate with the media as long as their reporting is kept professional and does not jeopardise judicial proceedings in any way.

Rudic, however, focused more on lawsuits filed against the media for defamation, and issues surrounding the implementation of the Law on Freedom of Access to Information.

“It is very important to get data on the number of lawsuits filed against the media. This is necessary for us in order to determine the appropriate direction for better education of journalists,” stated Rudic.

The seminar was organised as part of the Council of Europe project Promotion of Professionalism and Tolerance in the BiH Media, funded by the governments of Norway and Ireland.