Project aims to bridge divide between media and civil society and stimulate investigative journalism through grants and mentorship. 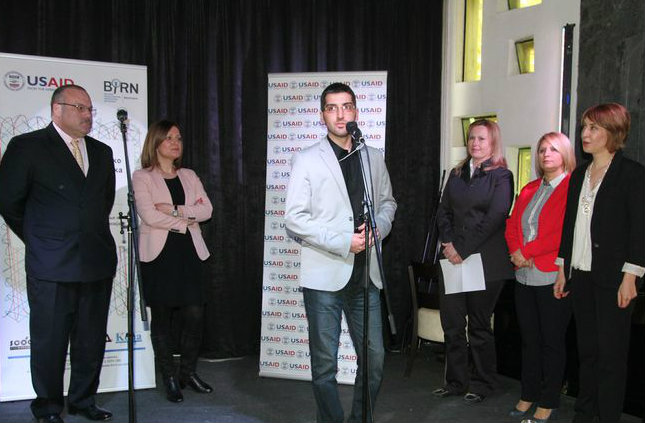 BIRN Macedonia today promoted its Project for Investigative Journalism and Cooperation between the Media and Civil Society, gathering representatives from different media outlets and CSO representatives engaged in various fields in Skopje.

The project, part of the wider USAID Program for Strengthening the Independent Media in Macedonia, aims to improve cooperation between journalists and civil society through debates and workshops and to contribute towards more independent investigative stories by offering small grants and mentorship to investigative journalists.

Michael Stievater, Director of the USAID Macedonia Office of Democracy and Local Governance, underlined the importance of collaboration between the CSOs and journalists.

“This project will provide journalists with a unique opportunity to gain from their peers’ experiences, identify common issues, investigate and speak out on vital issues,” Stivater said at the promotion.

Ana Petruseva, host and director of BIRN Macedonia, explained that the project intended to help fill a void in the media in Macedonia and provide a platform for investigative journalism.

“I would like to highlight the importance of this project for both civil society organizations and journalists in Macedonia, especially in this turbulent period that the media in Macedonia is in now,” she said.

Sabina Fakic, of the Centre for Civil Communications, a partner organization, said the next project event, on April 17, would be a public debate between NGO and media representatives on issues of common interest.

More than 70 guests from the media and civil society attended the first event of the project.

Running until July 2015, it will award 40 small grants to journalists writing investigative stories and 10 scholarships for journalists to attend the BIRN School for Investigative Journalism.

More than 100 stories will be published on a new internet media outlet, which will be initiated to promote independent and investigative journalism.

The project will also hold 20 discussion groups and workshops for journalists and civil society organizations on topics of interest.