Between May 7-9, 2012, Jeta Xharra, BIRN Kosovo Country Director, attended the 2012 Oslo Freedom Forum as one of the speakers. 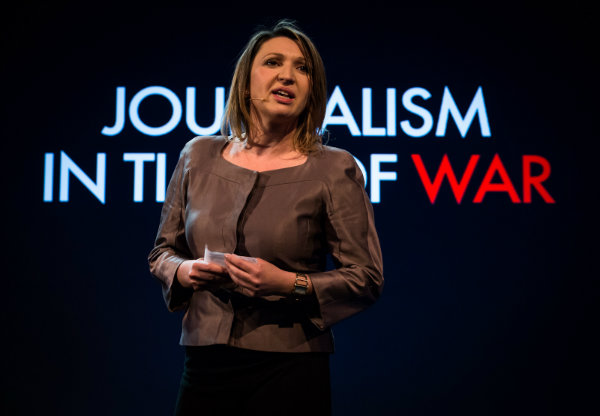 Xharra was one of 36 speakers at the forum.  She gave a presentation entitled “On Air and Under Attack in Kosovo” was about journalism during peacetime and how it can as challenging as journalism during wartime.

She recalled her work during the Kosovo conflict in the late 1990s.

“The media was basically aiding the killings, and de-humanizing the enemy…The war time reporting was worth risking my life and getting occasionally arrested by the Serbian authorities,” Xharra explained.

“I thought things would get boring after the war. It was a time of peace after all…What happened next was that these freedom fighters transformed into politicians, a fascinating transformation to have witnessed as a local journalist.

“In post-war Kosovo, our job as journalists was to make politicians accountable to their public. A piece of cake, I thought. A piece of cake compared to war-zone coverage,” Xharra said.

Xharra described the effects of one of her media products, the current affairs show “Life in Kosovo.”

“It became the first of its kind to broadcast debates, such as those held in every town in Kosovo during the municipal elections. The municipal mayor would declare his promises and a year later the tape would be played back to him.”

“This is when things started to get messy…some of these mayors were former freedom fighters and we challenged them all despite their war credentials. They started using their intimidation tactics by physically threatening me and my team and eventually it led to a 12 day campaign of government tabloids which labelled my team and me as traitors and Serbian spies,” Xharra said.

The Oslo Freedom Forum is an annual event that started in 2009 to bring humanitarian issues to the top of the global agenda, highlight the stories of human rights advocates an encourage the exchange of ideas.

This year it has brought together and enabled a platform to exchange experiences with some of the most notable and inspiring speakers, including Ahmed Benchemsi, a Moroccan journalist and media entrepreneur, Scott Carpenter, principle at Google Ideas, Nick Cohen, British journalist, author and political commentator, Naomi Natale, installation artist and social activist, Julia Ormond, an Emmy award-winning stage, film and television actress.