Three out of seven candidates vying to be the mayor of Klina, among which the current mayor Sokol Bashota, have received apartments built from the Municipality. However, Fadil Gashi (LDK) and Enver Berisha (AAK), beneficiaries of these pricey gifts, engaged in fierce discussion with Bashota during the “Life in Kosovo” debate. One of the candidates, Prend Buzhala (PShDK) and the incumbent mayor Bashota did not allow their families to provide short profiles for them, because, according to them, they did not want to politicize their families. 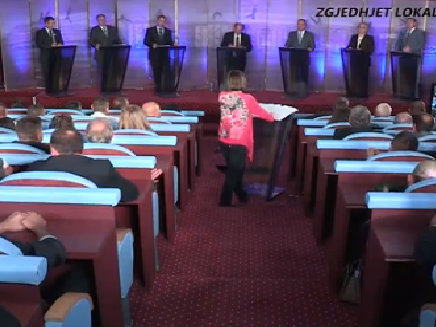 The candidates running for the mayor of this municipality are Sokol Bashota (PDK), Fadil Gashi (LDK), Hajzer Idrizi (LVV), Enver Berisha (AAK), Avni Gashi (AKR), Prend Buzhala (PShDK) and FIlip Berisha (PDI)
The current mayor and Bashota inaugurated the new water factory and the building of the culture centre during the electoral campaign.

Challenged by host Jeta Xharra, on the reasons why they were inaugurated during the campaign, Bashota said that the project were completed during his mandate, although he has made this electoral pledge for two years now.

The 2013 municipal report of the GAP Institute reveals that Klina, with six rivers flowing in its territory has only 23 per cent of its population connected to the public water supply network.

The new water factory will be ready in February 2014, although the municipality has failed to pay its debt of around 300,000 euro to few Dutch and Kosovar construction companies, which has become an obstacle in launching the plant.

During the debate, Bashota said that he had paid the last installment of his debt two days ago, adding that in ten-days time citizens of Klina will have plenty of drinking water.

Klina does not have a Culture Centre, and nor does it have a library. Most of the candidates promised that they will accommodate a library inside the new building of the Culture House. Klina has an overpopulated kindergarten, where the number of children is well above fifty.

Filip Berisha (PDI) pledged that the municipality would have only three departments, should he come to power. This model of governance, according to him, was a European one. At the moment, Klina has six municipal departments, renowned for their large spending of public money.

Prend Buzhala (PShDK) was challenged for his political turns he had made in his career, switching between three political parties before. Buzhala said that even the English politician Winston Churchill has changed three parties, but not his principles, claiming that the same is true for himself.

The Vetevendosje candidate, Hajzer Idrizi, answered a question about the equipment in the Youth Centre after it closed down. Idrizi said that all the equipment belonging to the said centre were there and that nobody has touched them.

Enver Berisha (AAK), running for multiple times for this political party, spoke about the reasons why he still is the candidate for the AAK. Berisha said that he would have been the winner of previous elections, had the process not been manipulated, and that is why he enjoys the faith of his political party to run again for Klina. He said that Bashota’s victory in previous elections was embarrassing.

In the meantime, Bashota labeled Berisha from AAK and Gashi from LDK as “veterans of losing”, warning them that the same will happened again during the November 3 elections.