Speakers at a conference in Bucharest have attacked temporary restrictions that prevent Romanian and Bulgarian citizens from working freely in several EU countries. 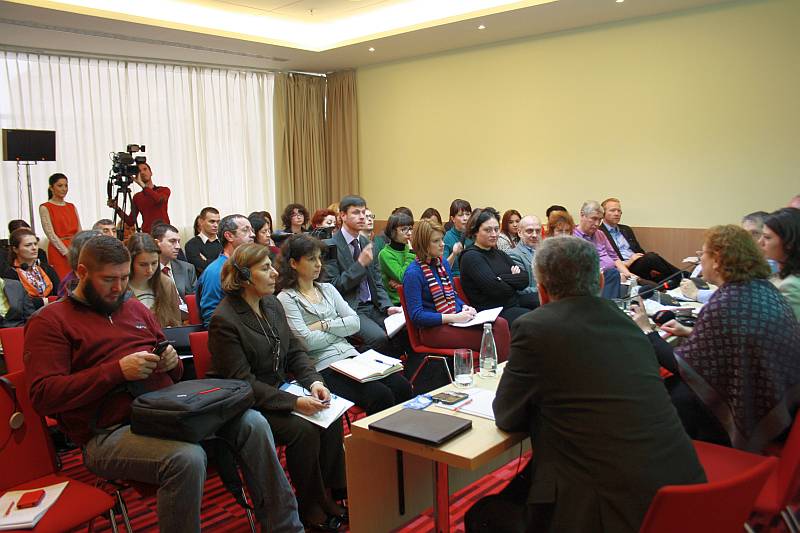 The curbs are due to remain in place until their maximum legal limit expires at the end of 2013 – seven years after the two so-called “A2 countries” joined the bloc.

“Seven years no longer mean restrictions, they no longer mean differentiation – they mean discrimination,” said Vasile Puşcaş, Romania’s chief-negotiator with the EU in 2000-04.

Romanian MEP Renate Weber told the conference, organised under the auspices of the Balkan Fellowship of Journalistic Excellence, that her country had expected the curbs to be lifted sooner.

“When we joined the EU, we agreed to these long-term restrictions, hoping they would be lifted long before the deadline,” she said.

She argued that this would have been logical as European Commission studies had “demonstrated the benefits [to other EU economies] of the Romanian and Bulgarian labour force”.

However, she said, the restrictions had become an “electoral weapon” in the domestic politics of the countries that had imposed them.

Several EU nations – including the UK, Germany and France – have enforced laws that aim to restrict Romanian and Bulgarian migrants to specific sectors of their labour markets. Under EU rules, any such curbs must be lifted by the end of 2013.

The looming deadline has prompted speculation in the media that some governments may look for ways to extend the curbs.

However, speakers at the conference said any talk of prolonging the restrictions was misinformed.

Luminita Odobescu, a senior official from the Romanian Prime Minister’s Chancellery, said her government was confident that its European partners would lift the curbs in January 2014, in accordance with the EU accession treaty.

Weber added that Romania would challenge any member state that “invented reasons or statistics” to extend the restrictions on A2 citizens’ right to work in the EU.

The conference, held on February 13 at Bucharest’s Novotel Hotel, looked at the effects of the curbs on A2 workers as they entered their seventh year. Participants in the debate included Romanian government officials, academics, foreign diplomats and trade union officials.

The conference was prompted by an investigation by reporter Sorana Stanescu that showed how labour curbs have left Romanian builders vulnerable to exploitation in the UK. The investigation argued that the restrictions were in some respects counter-productive, harming indigenous workers by driving down wages and safety standards, as well as depriving the British economy of tax revenue. Stanescu’s report was produced as part of the Balkan Fellowship for Journalistic Excellence, an annual bursary for investigative and long-form journalism.

Governments in the UK and elsewhere argue that the labour curbs have protected the domestic workforce and restricted immigration from eastern Europe.

However, speakers at the conference questioned if the restrictions had been effective.

Sean Bamford, a migration expert with the UK’s Trade Unions Congress, said there was “no evidence that Romanians and Bulgarians have threatened the jobs of British nationals”.

“They have however left Romanian and Bulgarians open to extreme forms of exploitation.”

Bamford said the British workforce’s problems were caused by “casino capitalism” and the failure of government regulation, rather than by migration from eastern Europe.

Dumitru Costin, the president of the Romanian National Union Block, said the labour restrictions had benefitted “employers, some employment agencies, lawyers, insurance companies… and last, but not least, those politicians who lack solutions and vision”.

Sociologist Dumitru Sandu said most Romanians in future would choose to migrate to Germany, rather than the UK, because its economy was stronger.

The Balkan Fellowship for Journalistic Excellence was established in 2007 by the Robert Bosch Stiftung and ERSTE Foundation, in cooperation with the Balkan Investigative Reporting Network (BIRN), to promote incisive, cross-border reporting. The first prize-winner of the 2012 edition was Romanian journalist Sorana Stănescu, for her investigation: “Cheap, and Far from Free: The Migrants Building Britain”.