BIRN’s new Balkan road-movie documentary, The Majority Starts Here, received a warm welcome at its premiere in Kosovo on Wednesday. 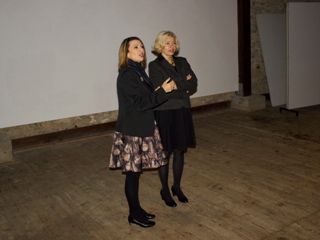 Representatives of local and international institutions, civil society groups and artists applauded the premiere in Kosovo of the film screened at the Faculty of Architecture in Pristina.

“The message of the film is that people still have different perceptions of the conflict and disagree, but can sit together and talk, without using guns to sort out differences,” Gordana Igric, BIRN Regional Director, said, delivering a short introduction to the movie with Jeta Xhara, BIRN Kosovo Director.

“It was quite an achievement to be able to tell the history of recent wars in six different countries in the Balkans in one hour through the eyes of 20-year-old characters,” Xharra said, adding that the film should be shown in schools throughout the region, “so that young people don’t grow up with partial knowledge of what happened in the 1990s.”

The screening met laughter, murmurs and moments of silence as six youngsters described their wartime experiences during the Balkan wars.

During their journey across the region, the six young participants from Bosnia, Croatia, Kosovo, Macedonia, Montenegro and Serbia met war veterans, refugees, unrepentant nationalists and people who advocate reconciliation in an attempt to discover how the Balkan wars had affected their own generation.

The film was first shown in Skopje in Wednesday and on Thursday in Sarajevo and Belgrade, while screenings are set for Zagreb on October 3 and Novi Sad on October 7.

A three-episode version of the documentary will also be aired on TV channels across the Balkans.